"Gaylactic Network" is also responsible for giving out the Gaylactic Spectrum Awards. 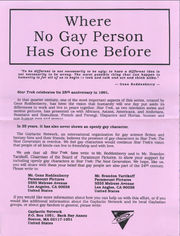 It has several affiliate chapters across the United States and Canada. Members share an interest in science fiction, fantasy, horror, comics and role-playing games.

From a 1991 flyer urging fans to write to Gene Roddenberry and others to encourage gay characters on Star Trek: The Next Generation:

Star Trek celebrates its 25th anniversary in 1991. In that quarter century, one of the most important aspects of this series, created by Gene Roddenbeny, has been the vision that humanity will one day put aside its differences to work and live in peace together. Star Trek, as two television series and motion pictures, has presented us with Africans, Asians, Americans, and Andorians, Russians and Romulans, French and Ferengi, Hispanics and Hortas, human and non-human men and women.

In 25 years, it has also never shown an openly gay character.

The Gaylactic Network, an international organization for gay science fiction and fantasy fans and their friends, believes the presence of gay characters in Star Trek: The Next Generation is overdue. We feel gay characters would continue Star Treks vision that people of all kinds can live in friendship and with love.

Recently, I received a flyer from a group called the Gaylactic Network. The flyer pointed out that, in 25 years of Star Trek, there has never been an openly gay character shown on the show. The flyer asked people to write to Paramount Pictures to ask them to introduce gay characters to the show.

I am not gay, but l am a supporter of gay rights. I have attended the annual San Diego Gay Pride parade, and have stood in support of gay rights at protests that have been organized by anti-gay groups. These are my bona fides.

It is with very mixed feelings, however, that I received this call to arms.

Is Star Trek now just a "plaid pants, golf-course, Republican" vision of the future? Or has it retreated from the focus on the individual to a focus on the global, featuring stories about war, ecological disaster, and nationalism, while backing away from stories about sexual intolerance, bigotry on the individual scale, discrimination, and so on. Perhaps. Perhaps not.

I have a pen-pal who believes that Star Trek has betrayed its origin by neglecting these issues. My own view is that the country has betrayed the populist ideals of the sixties by retreating from the days of daring confrontation. The forces of oppression have mustered, and now wield that weapon most deadly to advertisement-sponsored television: the organized boycott.

Today, a television show must either take an aggressive and challenging posture - Married with Children, or the aforementioned episode of L.A. Law - or it must lay low, and hide behind placid (and plaid) middle-of-the-road values. It makes for less socially relevant television, which is a shame.

Star Trek could show an openly gay character, and could even do so in the best possible way: namely, without calling attention to the fact in an obvious way. The show could have a male character kiss another male character, all in an open place - say the "Ten Forward'" cocktail lounge - and none of the other crew members near by would react. The scene could state very positively, that this is entirely normal and accepted.

Perhaps this would be a good thing. Perhaps it would cause a controversy that would end up harming the show, harming Paramount, harming us all. I think, though, in all honesty, that I'd like to see that scene. What I don't want to see is pressure put on Paramount to cause them to feel they have to produce that scene. We shouldn't write letters to them, telling them that they should do it. It's none of our business. If they do a show we like, we should tell them. If they do a show we hate, we should tell them. But they're the people who write and produce the show. We really ought not to tell them what they can, can, must, or mustn't write. I feel that I, at least, have no right to an opinion. I'm not a producer.

If Paramount produces such a scene, and then the forces of intolerance muster a forceful opposition to the show because of it, then it becomes our business, and we should then support Paramount in every way we can. Censorship is one of the dirtiest evils of the age. worse, in its way, than racism or sexual bigotry. But if we add to Paramount's problems by presenting our own list of demands, we become part of the problem, not the solution. To put it bluntly, that kind of pressure is un-American.

Thus, although I agree with the sentiments, I think that the Gaylactic Network is aiming their letters at the wrong target. They should continue their work, supporting movies and television shows that show gays in a favorable way, and working to oppose people who, out of ignorance and intolerance, seek to condemn or censor such shows. [1]