Gamma World is a role-playing game set on a post-nuclear-apocalypse world, ostensibly earth. Players choose one of three races for their characters ("pure strain" humans, mutants, or mutated animals), and randomly roll stats and, if mutated, mutant powers. Powers include some rather extreme disabilities (like "cannot notice the existence of fire") and overall power-level is fairly low. Character creation is quick and simple, and games tend to the ridiculous rather than serious or angsty post-apoc scenarios; giant mutant badger PCs traveling alongside mutated humans with 6 arms and acid touch aren't uncommon. 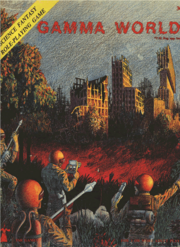 Possible the most memorable aspect of Gamma World, and the reason it's still occasionally played, is the Artifact Use Charts.[1] Characters are presumed to have no understanding of pre-apocalyptic technology, and so must roll on a complex chart to learn to operate even the simplest of devices, like a lighter or eggbeater. Results can include injury or even death for more complex devices, and GMs often attempted to describe the chart-rolling intervals in the game setting.[2]

The original publication remains the most popular version of the game, with the second edition often serving as supplemental material to flesh out the rather sparse information in the first. Gamma World is one of the few, perhaps the only, RPG where the later editions are disdained in favor of the first, raw, least-developed edition. While it's had at least 5 editions (nobody's sure how to count the Difference Engine version), gamers mostly rely on the first one for worldbuilding and the artifact charts, drawing a few details from 2nd edition (which had pictures for most of the odd mutated creatures), and ignoring everything the later versions said about the world.[3][4][5]

(To be added: Info on fan reactions to later editions.)

For a thirty-odd-year-old game, it has an amazing level of support and interest online. It's still getting reviews, meta essays,[6] and "we played Gamma World last week and it was a blast!" posts.

Gamma World was often used as the gamer equivalent of crack!fic because it allowed such ridiculous character premises, and the randomly-rolled mutations meant not knowing if a character would be remotely viable. For example:

Weasly Crusher: "My character is a mutated human with heightened intelligence and hemophilia."
Blobert Smith: "My character is a normal human that worships the writings of Roland Dahl."
Ol' Yellowbelly: "I'm playing a mutated cactus. His one possession is the little red wagon he sits in. He moves it with telekinesis."
Me: "Why.....?"
Ol' Yellowbelly: "Because no one attacks the cactus! It's brilliant!"
Deviant Boy: "I rolled up a humanoid mutant. He has size reduction, multiple appendages and enlarged appendages. I drew this picture of him? See?"
(Brief Horrified Pause)
Me: "His name is 'Doc Cock'?"
Deviant Boy: "Yeah he's like Doctor Octopus but he walks around on--"
Me: "I get it."
Deviant Boy: "They're really big and he's really small and there are eight of them and if he needs a jet boost or distance weapon all he has to do is--"
Me: "NEXT!" [7]

Runner up of the 1978 Charles S. Roberts Award for Best Fantasy/Futuristic Game at Origins '79.[8]

House Rules include ways of coping with vehicles,[9] attempts to bring balance to the power-levels of the characters,[10] and worldbuilding details that enhance and sometimes contradict canon.[11] Many house rules also created simplified versions of the artifact use charts;[12] although they were loved, some players preferred to resolve the issue of "what happens next" in fewer dice rolls, and condense the chart to a much smaller version, allowing the GM to say "you spend two hours tinkering with it, and you can now recharge batteries," or "after an hour and a half of poking at the crystal coffin, you have managed to put Joe into cryo-stasis without prepping him. Joe dies."

[Other than the perpetual "what got mangled in the newest edition, and are there any useful tidbits to grab from it anyway?", there may not be any GW controversies.]

Silly characters were much, much more common than serious ones.[13] However, the game was often played in a sort of deadpan tone, wherein nobody overtly acknowledged the ridiculousness of a mutated 8-legged moose traveling with three blue-skinned humans with porcupine spines—who believed they were the only true humans left on the planet.

One common use for Gamma World was "your D&D characters are transported to Gamma World." TSR published conversion rules in the AD&D manuals for several of their other games, presumably to encourage gamers to buy them all.