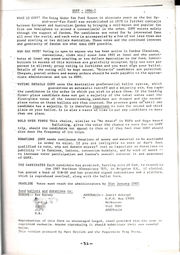 GUFF ("The Going Under Fan Club, known in alternate years as the Get Up-and-over-it Fan Fund") is a fan fund was established in 1979 to further contacts between European and Australian fandom by bringing in a well-known and popular fan from one hemisphere to the other to attend a convention in the other. A fan needed five nominators to be eligable.

In 1986, there were three nominees, Valma Brown, Irwin Hirsh, and Jean Weber. One fan wrote an impassioned plea in an issue of Hypertension asking fans to vote for him as a write-in after his nomination was voided when two of his five nominators were determined not to to be living in Europe.