Fuck You, She's Awesome (often styled FUCK YOU, SHE'S AWESOME) is a meme originated by dsudis in April 2008. It essentially involves listing or talking about female characters who are AWESOME.

So I was adding some new interests to my LJ profile (because I, uh... have some new interests. Yes.) and found myself feeling defensive every time I typed a female name, thinking, basically, FUCK YOU, SHE'S AWESOME, because I felt as if someone somewhere was going to be criticizing my love for them.

So, anyway, then I made a list of women who make me want to say FUCK YOU, SHE'S AWESOME. They are far from the only women who are awesome, or the only women people need to be told to step off of, but they are the top ten I feel that way about, right now, off the top of my head.

If you want to argue with me about the awesomeness of any of these women, I am afraid I will simply be referring you to the subject line. THAT IS ALL.[1]

-responses to the meme. 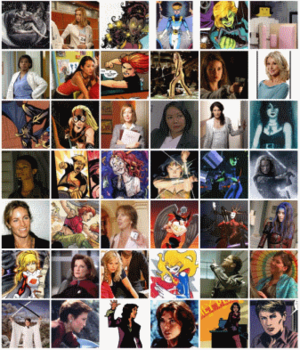 Partial screenshot of collage of images of awesome female characters, posted as a meme response by oddity collector[2]

The phrase is now also used more generally, for example as a tag on posts about misogyny in fandom.