For other things with this title, see Fantasia.

Fantasia is a gen multifandom anthology. It has the subtitle: "The One That Got Away" which refers, as explained in the editorial, to the escape of a mouse in the editor's household during a zine meeting.

This is technically a multimedia zine, but in fact it's almost entirely B7. I've had #s 1 and 3 for a while and finally found #2- - I was vastly amused by its subtitle (which actually refers, as explained in the editorial, to the escape of a mouse in the editor's househould during a zine meeting).

If this zine comes your way cheaply, it's worth having a look at, but I don't recommend going to any great trouble or expense to get it.

I have a question about what seems to be a crossover story in #3. Blake and Cally meet a pair of Americans named Ralph and Maxwell, who give Cally "The Suit," which confers superpowers on its wearer. What does this refer to? Greatest American Hero, maybe? (a show I never saw-- that's just a guess.) [1]

Fantasia 1 was published in January 1988. It has a front cover by Julie Montgomery. Other art by Tom and Bill Carroll. 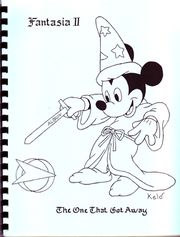 Fantasia 3 has the subtitle: "Oops!" It was published in 1989. The front cover is a Bloom County parody. Art by Celeste Hotaling and Sarah Jane Keating.