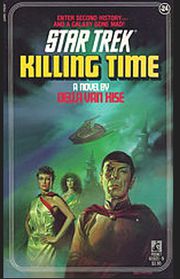 After years of fannish whining about how horrible professionally published Star Trek books were - and how fans could do it better - Della Van Hise (a prolific K/S slash writer and experienced fanzine editor and publisher) sold Pocket Books her Star Trek manuscript. This book was published in 1985 as Killing Time, a Star Trek tie-in novel.

While not outright slash, Killing Time definitely depicted Kirk and Spock as closer than most pro Trek books did.

Killing Time is also notable for a much-discussed publisher mix-up, which resulted in the release of two editions: the first being much more slashy than the second.