From Fanlore
(Redirected from Envy)
Jump to: navigation, search 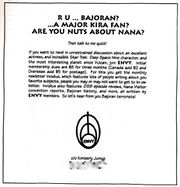 ENVY was a fan club for enthusiasts of Nana Visitor, who played Kira Nerys on Deep Space Nine, founded in 1993. It was reorganised and renamed Nanites in 1996. In September 1999, it merged with the fan club for Alexander Siddig, The Doctor's Exchange, to become Far Beyond The Stars. The Visitor side of FBTS remains known as the Nanites.[1]

The fan club published a newsletter called Invidius during the ENVY days, and later one called Visitations.