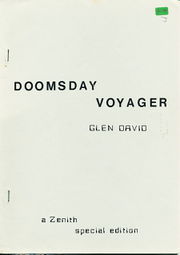 Doomsday Voyager is a gen Star Trek: TOS 30-page novel by Glen David. It has the subtitle: "a Zenith special edition"

The zine has neither cover art nor interior art.

Summary from an ad: "A Post-ST-WoK story. While trying to come to terms with Spock's death, Kirk undertakes a dangerous mission."

'Doomsday Voyager' is a Zenith Special Edition. It is not quite novella length, being 30 pages long, with no illos. It suffers a little, not, from being a Post-ToK story, because, of course, we all know what happened. Nonetheless, from the plot point of view, 'Doomsday Voyager' is well worth reading, written as it is, by the excellent Glen David.

The emotional content is another thing, however - you will have to supply much of it yourselves, and at times it will take a little guesswork to know what is going on in Kirk's mind.

The story is set a few weeka after Spock's death, and to all intents and purposes Kirk appears to have a death wish. We are given certain clues about this, although it is never set out in black and white, and there is certainly room for doubt at the end. Kirk volunteers to pilot a small scout ship on a hazardous mission, and McCoy suggests he take Chekov along claiming, on the face of it, that this is to boost the Russian's confidence again. Of course, it's possible that McCoy believes that Kirk may have thoughts of using the mission as on opportunity to do away with himself and will be deterred by Chekov's presence - you fill in the blanks.

On this mission, Kirk is confronted by someone who has also suffered a loss, and who blames him for it. Kirk appears to try and induce the 'intruder' to kill him - doesn't he? Or is this the famous Kirk bluff? Things that are said later make me unsure of the answer to those questions. I know what I think, but I'm not sure I know what the author wants me to think, and I can't decide whether this indecision is a good or a bad thing. Perhaps it is meant to reflect Kirk's inner turmoil? I don't necessarily want everything laid on a plate for me but there again, it would be nice to know the author's interpretation of events.

One very clever paragraph contains a bitter speech by the 'intruder' about life end loss. "...The only loss you've ever faced is your crew - your well-trained, expendable, duty-bound crew... My God, my God - do you know what it is to walk alone through the Universe from now till eternity?...."

Very poignant because of course we all know that Kirk is going to have to find out - at least I assume we do, but the scene ends right there and we never know what Kirk feels - we have to feel it for ourselves, and what if we've got it wrong? What if we are being over-sentimental? With 'my' Kirk, I know exactly how it would be - but with this Kirk, I'm not sure This is a fair example, I suppose, of Leonard Nimoy's 'open texture'. There is another reference later, for Kirk wonders if his 'intruder' had known about Khan and Spock, but his thoughts are more about the other's loss than his own and his sadness more general than particular. By this I mean he doesn't so much mourn Spock; but rather he Is enveloped in self pity. As the author puts it: "His own past held the seeds of his present in an utterly logical train of cause and effect....as he had sowed he now he reaped. The crop, however wild and dangerous, was his alone.".

In a way, this is almost a mystery story and there is no solution at the end no emotional catharsis. I appreciate there is no solution as such, but the story does rather peter out and Kirk does not seem to have gleaned anything from his escapade. Certainly there are clues to Kirk's distress if one looks hard enough but as a fair amount of the story is from Kirk's point of view, I wonder if that should be necessary?

All in all, 'Doomsday "Voyager' is an accomplished piece of writing, it draws together quite a number of established facts into a cohesive whole and it certainly doesn't insult the intelligence. My only doubt remains as to the author's motives, and I find that rather frustrating. I'd be interested to read anyone else's interpretation. [1]