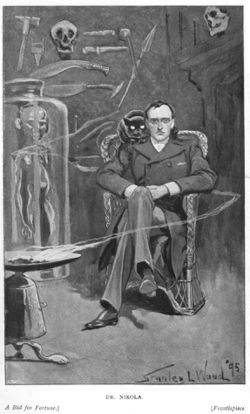 Doctor Nikola was a quasi-supernatural criminal mastermind and mystic, named after Nikola Tesla, who appeared in several books which defined many of the tropes of later villains including Fu Manchu, Carl Peterson (the Bulldog Drummond novels), and Ernst Stavro Blofeld (James Bond). He even had a sinister cat, named Apollyon! His usual foe was Richard Hatteras, an Australian adventurer more noteworthy for his strong right hook than his brains. He was usually shown as engaged in a protracted and utterly ruthless search for mystical secrets, most notably the secrets of raising the dead and immortality.

Nikola appeared in five novels, all of them initially serialised in The Windsor Magazine:

Since the stories were written as serials most chapters end with a sensational event of some sort; a fight, kidnapping, discovery of a body, etc. They first and last are typical adventure novel of the period (with some racial stereotyping which some readers may find offensive), the second through fourth get into seriously weird territory with mad science, magic, mesmerism, and scenes set in China, Tibet, and other exotic locations. Nikola's role seems to change with each novel; by the last he is essentially a anti-hero, punishing offenders who the law can't touch. In all of the books he is portrayed as someone who regards himself as above all laws, but follows his own strange code of conduct.

All of the novels are available on line, but there appears to be no real fan base for the stories and no fanfic. This can thus be considered a microfandom.