Dip Him in Chocolate 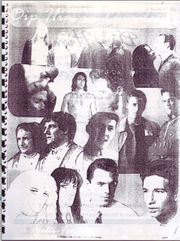 copy in the Ming Collection

Dip Him in Chocolate #0 is a slash multi-fandom anthology. Only ten copies, which were sold at a con, in addition to the contributors' copies, were ever published. Several people have reported ordering this zine and never receiving it. [1]

A photocopy of a contributor's copy was donated to the Mariellen (Ming) Wathne Fanzine Archives Collection.