Diário de Bordo (Logbook in English) is a Brazilian Star Trek Club fanzine. Its very first edition, number zero, was released on 1ª Convenção de Jornada nas Estrelas do Brasil, in June 1989, an event that also marked the foundation of Frota Estelar Brasil -- a Brazilian Star Trek International Fan Club --, entity that is the mother (and father) of the NovaFrota.

In 1999, on the 10th anniversary of Frota Estelar Brasil, a special year X edition was sent to the club's subscribers.[2]

There were 35 editions in this initial life of Diário de Bordo, a period in which it was consolidated as the main printed publication aimed at Brazilian trekkers. In mid-late 2017 and early 2018, at a time when print publications began to lose steam, president Luiz Navarro of the NovaFrota club decided to bring the Logbook back, with a modern and colorful look, betting on the physical publication of the traditional magazine, which turned out to be a huge success because the partners loved the return of this material, which counts with zero numbering from the first edition of this modern phase.

The zine brings complete articles about Star Trek news and other related topics. There is also a news section, coverage of NovaFrota events, analysis of collectable geek products, articles recounting fan life, nostalgic articles recalling the activities of the former Frota Estelar Brasil, and space for the trekker artist to show his work.[1] 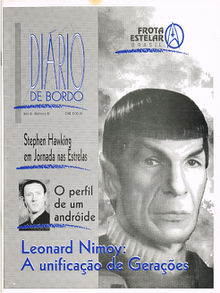 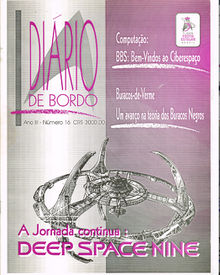 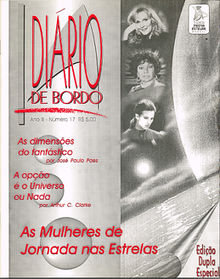