Descent is a gen Real Ghostbusters 136-page (81343) novel by Emilie Renée Karr. It has illustrations and a cover by Marie Torres. 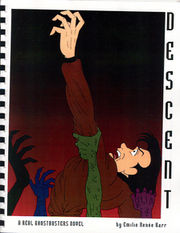 It has a 2002 sequel called Flashback.

From Agent With Style: "Peter and Egon are kidnaped by an old aquaintance gone mad. To further his illegal experiments, the man injects Peter with deadly, psychotropic drugs that turn the Ghostbuster into a paranoid wreck. As a final test, he locks Peter and Egon in an abandoned warehouse, after giving Peter a loaded gun. All of the other test subjects had killed their friends--would Peter? Where can Egon run that Peter cannot find him? Will Ray and Winston find the pair before the voices in Peter's mind force him to do something he'll forever regret?"

Author's Notes on the Online Version

Descent was originally published as a novella-length zine, and is still available for purchase at Agent With Style [2] for those who would like a hard copy with lovely illustrations. I'm putting it online now at the request of a couple friends, for those who (like me) are mostly unfamiliar with print zines and accustomed to obtaining their fic on the Internet.

I finished this story in the summer of '99, before my senior year at college. Being as old as it is, I find much of the writing unsatisfying; my prose has developed in the intervening years, but there are some moments I remain proud of, and I find myself unwilling to rewrite and thus erase my past self's efforts. So the only changes from the original zine are HTML formatting and possibly a few fixed typos. As for the story itself, it was always intended to be an exercise in pure hurt/comfort, and as that I hope it still to be successfully entertaining!

Boy do you know how to whump someone :) I stayed up way too late reading this and it was hard to tear myself away. I really loved the ghost helping Peter and then taking her revenge. You've got such a beautiful way of showing the relationships between the guys. [4]