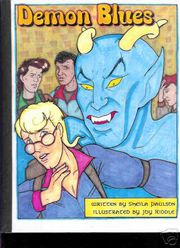 Demon Blues is a gen 94-page Real Ghostbusters novel by Sheila Paulson with art by Joy Riddle. It won a 1995 FanQ.

Summary from Agent With Style: "Peter's father and Egon's mother are dating, and Egon can't stand the idea. The coolness between him and Peter persists until Egon vanishes without a trace on a bust. Attempts to locate him in a parallel universe keep failing and Slimer spookily insists there is 'no Egon now.' Has the team's physicist vanished...for good?"

From Bill Hupe's catalog: "Egon didn't like it when Peter's father starting dating his mother, especially when Peter started teasing him unmercifully about the possibility they might become stepbrothers. But none of them liked it when a combination of an unfriendly demon, the atomic stabilizer, and a burst of brilliant light that made Egon vanish."