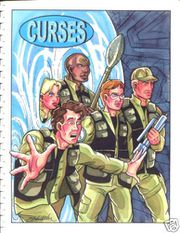 cover by Sandy Schreiber -- "One of my favorites... It was pretty hard to draw the SG 1 team as 'cartoony' as the RGBs, but I think they turned out all right. Watercolor and ink on Bristol." [1]

A crisis at Stargate Command involving increasingly violent behavior from the SG teams meets up with a curse that was placed on Peter Venkman when he attempted to deal with a demon to save his friends' lives. Cast out of the Ghostbusting Team, Peter finds himself at Cheyenne Mountain, helping to solve the mystery, believing only his death can break the curse.

This novella is follows the story "Ghosts" in Gateways 1. It is not so much a sequel as a sequential story and can be understood without reading "Ghosts" first. Gorgeous color cover by Sandy Schreiber.

Gate travel has started producing bizarre and increasingly violent behavior among the SG teams. It begins when the team goes through the gate and stops when they return to base. Dr. Mackenzie suggests gate travel burnout or the dangers of a cumulative effect and there is talk of closing down the gate if a cause can't be found and corrected. Jack thinks it would be nice if there were any shrinks who could 'think outside the lines' and come up with a better answer. Meanwhile, Dr. Peter Venkman finds himself outcast and ostrasized from the Ghostbusters through the intervention of a powerful entity who affects his friend's minds. Only his death, he believes, will lift the curse and cause his friends to want him back, and that will be too late to do him any good. His random wandering to leave behind the pain of his expulsion bring him to Colorado Springs, where he encounters Daniel Jackson--who recognizes in him a possible solution, a psychologist who has never learned to think *within* the lines. Since Peter has some level of clearance already and knows about the gate, Daniel asks General Hammond to recruit him, at least temporarily. Rather than shut down a multi-billion dollar project without trying everything, Hammond agrees. What happens then becomes a race to solve the intensifying problems of gate travel before a team member dies of the increasing violence. Who is responsible? Who has access to the base? A Ree Tou? Someone like Chronos or Nurti? A plot of Maybourne's? Something more intrinisic? And why aren't Carter and Teal'c affected by the intensifying frenzy that affects the teams?

When the life of one of the SG-1 team is endangered, the need for answers must come quickly. And how will Peter ever find a way to go home? And if he can, will the entity be waiting? [2]