From Fanlore
(Redirected from Crossing the Line Collected)
Jump to: navigation, search 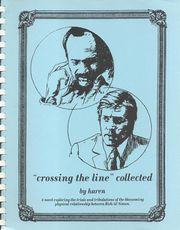 It was originally published in collected form in 1992 from Crossing the Line.

From a 1995 ad: "karen's long running tale of the trials and tribulations of Rick/AJ crossing over into a physical relationship. Includes all previously published chapters, plus two more installments! The definitive S/S story."

It is subtitled: "A novel exploring the trials and tribulations of the blossoming physical relationship between Rick/AJ Simon."

"A novel of the guys slowly coming to realize, name, and act on their attraction. It deals with a lot of the same issues we all love in slash -- a realization that this trust and friendship is good, and that expressing it sexually feels like the natural next step." 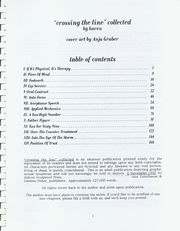