Cosmica is a science fiction zine with at least six issues.

Its content was focused on science fiction, speculation, poetry, artwork, and science.

In 1975, it merged with the Lee Majors/Star Trek zine Arcturus. 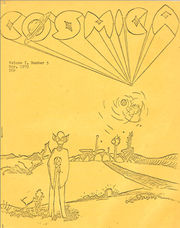 Don't believe everything you read. How many times have you heard that? But, AHA! Have you ever read it anywhere???

This belief applies to reports on the Star Trek revival, especially. I have in my hand a report by the Star Trek Welcommittee that plans a SERIES next spring but still just that -- plans. Oh, well, another false alarm, it seems. But I DID get a postcard from Paramount addressed to "Dear Trekkie" (how little THEY know), announcing the new movie. I can just see the studio mailing out millions of those things to stop the floods of mail that no double come in when the movie is produced.

The art is by Michael Swan, Randall Miller and Linda Gulak. 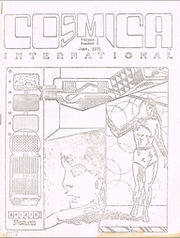