Constellation was a Star Trek monthly newsletter published by Westrek, a fan club in Australia.

It began in January 1984 to alleviate time and money problems regarding the club's other publication, a zine of fiction, article, and reviews called Constellation. By dividing the two publications in 1984, the heftier, meatier fanzine could be published less often and offered only to select fans (thus saving on printing and postage costs), and the more timely club news could be distributed in a much more nimble way.

EDITORS' REPORT: He also recommend a change of formats described in our editorial, where we helve the frequency of a more interesting fanzine whilst sending a single-sheet newsletter (like this) every month. We have produced this rather oversize issue in this format to demonstrate what we have in mind: all the news that's fit to print and a good read. It is also possible that while the newsletter could continue to be posted out, the fanzine could he distributed to members at the club meetings and only posting to those who don't come (itself a saving of around $50 total postage). This new format, even assuming postage of everything (which is going up in March), comes to a total of roughly $200. Say's shorter monthly format suggestion would cost, over the same time, roughly $180 total. 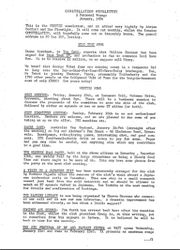 Constellation 1 was published in January 1984 and contains 3 pages.

"Diane Marchant, in Tau Ceti, reports that William Shatner has been signed for Star Trek IV, and production is due to commence Real Soon Now. He is to receive $2 million, as we suppose will Nimoy.

"We heard that George Takei fans are raising money in a desperate bid to leap onto the "Buy-a-Star-For-Your-ST-Hero-Today bandwagon. Yes, Mr Takei is joining Shatner, Nimoy, presumably Roddenberry and the 1790 ether people on the Hollywood Walk of Fame for the bargain-basement cost of only $3000! Get yours today!"

It contains club news and and Star Trek tidbits. It also includes "Uncle" Ray Raspa's "Proposed By-Laws For the Care and Operation of the Gestetner," which outlined all the rules and expectations regarding the club's mimeo machine by club members and other fans.