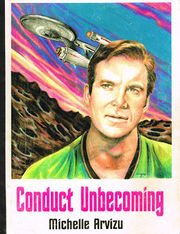 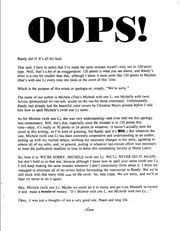 the "OOPS" from the editor regarding spelling the author's name wrong on the cover. 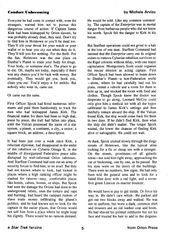 The cover is by Christine Myers.

Spock rescues a terribly (and sexually) traumatized Kirk from Orion slavers. Kirk is in denial to a dangerous degree, to the point that he beats up Spock. Eventually they work it out, then discover that there is a clone of the Orion who had captured and tortured Kirk. A bit much trauma and breast-beating by all parties, but a compelling story. [1]

Conduct Unbecoming focuses on the character of Jim Kirk, exploring his personal sense of honor and his relationships with Spock, McCoy and the other members of the Enterprise crew, as well as the ship itself. In Conduct Unbecoming, Jim Kirk is kidnapped and sold by Orion slavers to an alien who abuses him physically, mentally and sexually. His rescue by Spock from this horror merely sets up the story and the many conflicts therein. While it contains no actual depictions of sex (explicit or otherwise), and while it is not a K/S or any other kind of "slash" story, the fanzine is very much adult in theme and is intended for Mature Readers only. However, it is an excellently written example of classic Star Trek hurt-comfort fiction and a definite must-read for those who enjoy that particular genre. [2]

Technically, I suppose, this does not fit the accepted definition of K/S, that is a sexual relationship between Kirk and Spock. However, if we‘re talking about a love relationship, albeit one that doesn‘t come out and say so out loud, then this novel fits every definition of K/S I‘ve ever had. (In a hand-written note that accompanied the author‘s donation of this zine to the library, Michele says she thinks it is too.) Kirk has been kidnapped by Orions and sold to a sadistic monster of a man named Dost. He has been horribly abused both physically and sexually when Spock finds and frees him, breaking Dost‘s neck in the process. Now the long road back to normalcy begins. When the two men return to the Enterprise, Kirk finds he cannot get past what was done to him; the humiliation, guilt and despair that rape victims typically feel are very well portrayed here. In a chilling scene that is the pivotal moment of the story, Spock and Kirk meld, the Vulcan trying desperately to remove Kirk‘s pain. Kirk becomes confused and fights back thinking Spock is Dost. Spock allows it, and is severely psychically wounded. Kirk believes he has mind-raped his dearest friend. Kirk‘s command is in jeopardy, and McCoy, feeling he is too close to both of them to be of any help, turns their care over to Margo Peretti, an expert in psycho- astrosociology or the study of psychological behavior of artificial societies in space. During their ongoing counseling sessions, Perretti leads Spock, and especially the captain, back through their experiences with Dost, and while doing so uncovers the emotional ties that bind these two exceptional men so tightly to each other. As things finally seem to be looking up, they are forced to go back to the planet of Kirk‘s captivity when Dost shows up for a second time.

The novel is written tightly and with astounding insight into the psyches of these extraordinary men. Definitely worth your while and available from The KSP Zine Library. [3]

I‘ve had this zine for a while and was recently inspired to read it after discussion on K/S Central regarding some of the better stories that were without implicit K/S. My impression after finishing it is mixed. Here‘s a well-plotted novel that begins in a classic way, with Kirk having been captured, raped and tortured by a particularly sadistic slave trader. After his rescue by a most determined Spock, things turn in an unexpected way. I‘m accustomed to seeing James T. Kirk able to overcome most adversity and even personal injury and insult but this time recovery doesn‘t come easy for him. He feels unworthy to the extreme and is in a lot of emotional pain. Spock, in attempting to once again come to his aid, triggers an event that is possibly even more traumatic for the Captain than the original kidnapping. Kirk takes out all his anger and frustration on his first officer, physically injuring him badly. It is after this incident that he recognizes he has committed a grave violation of military justice – conduct unbecoming an officer. The guilt and remorse he feels is profound at a personal level as well. Spock is willing to forgive and forget, but Kirk will have none of it, slipping uncontrollably into a gripping depression that McCoy is unable to touch. I like very much the way Spock is portrayed here...he cares deeply for Kirk but is as mystified as I at his friend‘s behavior. He pleads with Kirk at one point when the human is about to make a reckless decision in beaming into harm‘s way, Spock implores, "This could be our last time together in this place, Jim. Do not depart from me in anger." For once this Kirk responds with kindness, but even then it seems forced. Through much of the story he is much more cold toward Spock than I like to see. Bringing in the ship‘s psychiatrist is of some help and I like this original character very much. It‘s Kirk I have trouble understanding. I‘m just not used to a Kirk who gives up and in my eyes he does this repeatedly in this complex novel. The part that came closest to saving the storyline for me was Kirk‘s somewhat reluctant return to his command persona long enough to conduct a brilliant bit of tactical warfare against three Romulan ships. But then he slips right back into the funk that is so unlike the Kirk that resides in my imagination. When the commanding Admiral, saved by Kirk‘s knowledge of the abilities of the Enterprise and his consummate skill in combat, refuses the Captain‘s resignation, I continue to be baffled by Kirk‘s reaction. It seems to not fit somehow. Resolution now appeared suddenly simple and that doesn‘t fit with the portrayal of Kirk in the previous chapters.

All in all, I can say "Conduct Unbecoming" entertained me, at times horrified and at times confused me. If a deep and involved psychological study is something you enjoy, you won‘t find a better one. I suggest trying it for yourself. [4]

Recently I had the opportunity to pick up a few Gen zines and found one real gem. It doesn't even resemble K/S, so I don't think it is appropriate to LOC it, but I had to mention there is some great writing out there that doesn't involve K/S but does involve Kirk and Spock. I know some of you don't want to bother with it unless it is K/S and that's fine. But I fell in love with Kirk and Spock and with Star Trek in its original form so I can completely enjoy a well-written story that doesn't show me what happens in their quarters or behind the scenes. The novel that got and held my attention this past month is Conduct Unbecoming by Michele Arvisu. I knew the name and suspected it would have something to offer. It could be likened to an unfilled Star Trek episode shown in at least two or three consecutive installments. It's very original and involved layers and layers of plot. Like the original series, it gave me moments that made me think, "Aha!" I believe Ms. Arvisu was hinting at something besides friendship could come of this relationship, but she was extremely subtle. Anyway, it was a nice read -- comparable to any mainstream novel I'd select from the bookstore or library. [5]

If you are familiar with Michelle Arvizu's work, you'll know how wonderfully she writes. Conduct Unbecoming is a fabulous novel with h/c galore (mostly Kirk, but Spock gets his share as well) and one I have reread several times. After all, this is the author of Brothers in Time in Amazing Grace 3 and Rain in Amazing Grace 4 -- two of my all time favorite stories -- and her writing is among the best you will find in K/S. If you are looking for the love rather than just the sex, here it is. In spades! [6]