From Fanlore
(Redirected from Comments form)
Jump to: navigation, search

A vid feedback (or comment) form was a sheet of paper handed out to vidshow attendees at the Escapade and ZebraCon conventions in the late 1990s asking the audience to offer comments on each vid as they watched.

As one fan described it the "Escapade vid show pauses for thirty seconds after every vid to allow people to write down comments if they wish."[1]

After the vid shows, the forms could then be cut into sections allowing vidders to take their comments home. However, before this happened, vidders would gather around a table containing the forms immediately after the end of the vid to read their feedback (sometimes aloud) and marvel at both the perspicacity and obtuseness of their vid audience. The idea, which originated with Sandy Herrold and Rache was eventually abandoned in the early 2000s as the feedback was often superficial and some audience members found it too distracting to watch the vids and write feedback in a 4-5 minute span in the dark. 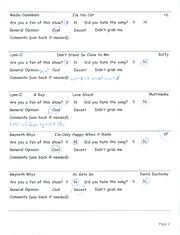 a sample page from the 1998 Escapade vid show comment form 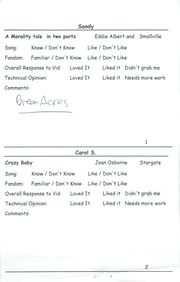 a sample page from the 2003 Escapade vid show comment form

In 2002, during the first year of Vividcon, the convention offered an online "comment form" that was essentially a feedback email address that would allow viewers to send feedback to the convention to then be forwarded to the vidder: "This form lists all the vids that have been shown at VividCon (either last year or this one) and has some others in there as well. It will forward comments directly to the individual vidders (vidders, don't worry, your e-mail addresses are not made public by the form) and allows you to send comments anonymously if you prefer."[2] Here are archived examples of Vividcon's 2003, 2004 and 2005 online comment forms.

However, as more and more vidders began offering their vids online, the need for an intermediary contact vanishes and the audience could send feedback directly to the vidder. Even so, many vidders continue to look for ways to get honest and immediate feedback from their viewing audience.

In 2006, Escapade attendees set up their own version of an online comment form for the vid show which generated over 100 comments. It can be seen here.[3]

For more info about comment forms, go to Vidshow.