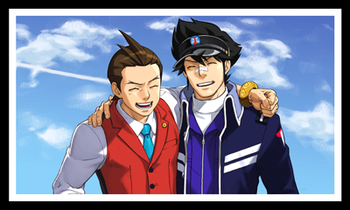 Clay/Apollo is a relatively popular fanon pairing in the Ace Attorney fandom.

Apollo Justice met Clay Terran when the two were in junior high school. Clay was crying alone after the death of his mother, and Apollo approached him to comfort him, saying that he didn't have a mother either. This is the origin of Apollo's catchphrase "I'm fine!", he and Clay would say it to reassure themselves and each other when they felt upset. Their friendship remained strong ever since, with both encouraging each other's dreams: Clay's of being an astronaut and Apollo's of being a lawyer. Clay was said to have supported Apollo during his unemployment between the first and second cases of the 4th game. According to some optional dialogue in the 4th case of Dual Destinies, Clay was the first person Apollo showed his badge to after passing the bar.[1]

Clay's introduction to the series came after Apollo's own game, and even then he only had a brief voiced cameo. However, his personality was that of a kind and idealistic young man and one of the people Apollo treasured most in the world. This made things all the more tragic when Clay was the murder victim for the 4th case of Dual Destinies, leading Apollo to break down and separate from the Wright Anything Agency to seek the truth on his own.

While not the level of juggernaut as Klavier/Apollo, the ship exploded in popularity due to the tragic story and fans craving more, ranging from happier times before Dual Destinies and speculation on Clay's role in Apollo's life during the 4th game. The most common types of fic are Apollo struggling to move on post-Dual Destinies and the loss of Clay, pre-Dual Destinies fic, or stories in which Clay managed to survive his stabbing, leaving the way open to hurt/comfort and recovery fic. Coffee Shop AUs are also popular, especially ones in which Clay was never stabbed in the first place. Stories about the pair's childhood and college years are common, too.

Some stories will meet in the middle of the canon tragedy and the desire for Clay to remain by Apollo's side by factoring in the series's use of Spirit Channeling. In these scenarios, Pearl or Maya Fey will allow Clay's spirit to borrow their body in order to give Apollo closure for his friend's death or just so the two can spend some time together anytime Apollo is missing him.

Due to the flashback and Clay's overall personality, the pairing invites much fluff and sweetness, be it G-rated or sexual. In a fandom where almost all pairings have some level of baggage or angst, Clay/Apollo is seen as one of the few healthy and truly functional relationships. Darker stories do exist, but for the most part the pairing is seen as romantic and healthy with only mild conflict outside canon angst factors.

Some shippers even came to believe the pair were canonically in love, and that the reason Apollo didn't introduce Clay immediately in canon was that such an introduction would have been his coming out. Some fans even believed it so strongly they went so far as to believe Dual Destinies invokved Bury Your Gays by killing off Clay. [2]

The pairing's chief "rivals" are Klavier/Apollo and Athena/Apollo, though the camps are generally civil to one another. Some fans even ship all three pairings and sometimes more, due to Apollo being considered one of the most easily-shipped characters in the series.