Champagne Wishes is a K/S story by Cordelia Naismith. 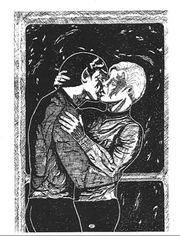 "This is a very nicely done pen and ink drawing of Kirk and Spock kissing in front of what appears to be a large port window. The cross-hatching, if that's what it's called, is well-executed. I especially like the symbolic representation of stars in the background, and the white outline. The tilt of their heads, especially Spock's, is lovely, A warm and loving drawing." [1]

It was published in the print zine First Time #42.

From the publisher: "Spock waits at the bar picked by McCoy to meet, and is pleasantly surprised when his captain shows up."

Almost every sentence in this story sparkles with wit, intelligence and humor. Reading it is a little like emptying a Christmas stocking because it contains so many pleasant surprises (and nary a trite phrase. I should add). The Kirk/Spock tension is especially well done, with Spock at his most Vulcanly tense and uptight and Kirk at his most disarmingly seductive. The story hints on the first page that Spock has un-First Officer-ry thoughts about Kirk, but stops short of showing Spock's feelings about Kirk until the sudden wave of possessiveness Spock feels at the bar. Obviously. Spock feels possessive because he's in love with Kirk, but it felt rather abrupt and theoretical to learn that Spock feels possessiveness without getting a glimpse of the love that's beneath that feeling. Or perhaps I needed to see the love before the possessiveness could become real to me. Perhaps a sentence describing the dull ache of longing Spock might have felt while thinking about Kirk as he waited for McCoy--or the passion he might have experienced and acknowledged with sudden clarity as he realized whom the men were talking about-would have helped. But that's a small point in a successful story. [2]

I really enjoyed this charming story from a brand new, first time author.

Spock is delightful as he waits for McCoy on leave in a bar, named of all things, the Wooly rhino. He doesn't understand why free drinks continue to appear at his table. ("It averaged two point two unsolicited beverages per minute.") Nor does he comprehend "... the shaggy money pouch that hung from the servitor's waist.H "...surely the proprietors were aware that a rhinoceros' protruding horn was on its forehead - not lower." Humorous writing is so difficult to do, yet must appear effortless if it is to be effective. This succeeds admirably.

I loved how Spock knows Kirk is in the bar before he sees him merely from two patrons' description of that stunning smile, mutable eyes, and dynamite rear end. And also how Spock and Kirk flirt with each other without McCoy having a clue as to what's really going on under his nose. Very nicely done. I'm looking forward to reading more of this author's stories. [3]

A short but very witty story of Spock waiting for McCoy in a bar called The Wooly Rhino. While he waits he overhears a conversation between two patrons commenting on someone standing at the bar, a certain someone who elicits the comments "Get a load of that smile!" and "Those eyes green, blue, or what?", and finally, "Jesus, check out that tight ass!" Naturally, Spock draws the conclusion that they are talking about his captain. The story is filled with similar tidbits that are impossible not to smile over. Cordelia has a dry, ready wit that had me enjoying her story thoroughly, even on second and third reading. K/S cannot have enough writers of humorous pieces, and I hope that this first story will be followed by many more. There's some definite talent showing in Champagne Wishes. [4]

Spock spends time in a noisy crowded bar, listens in to other people's conversations and picks up a 'date'. This is a nice, gentle story. The writing flows well, the humour is understated but just right for this tale. My only quibble is that I was left a little confused a s to how Spock knew that Jim Kirk was in the bar when he does not actually see him enter. Still this is a minor point and does not spoil the fun. [5]

I was re-reading my 'First Time' zines and came across this story. The story is great. Spock is in a bar thanks to McCoy, who asked to meet with him at the Wooly Rhino where waiters wear furry money pouches in front of their junk. So Spock waits almost 29 minutes and the whole time he keeps getting drinks that he didn‘t ask for. He tells the waiter he‘s not paying for them. During the wait, he overheard Brassy Voice and Martian Voice talking about this Terran, describing his attributes. It wasn‘t until they said tight ass that Spock knew it was Kirk they were talking about and turned around in his seat to find him being accosted. It was just too, too funny. It is one funny and cute story. Anyway, if you haven‘t read it, it is a definite must read. If you don‘t have the zine, run don‘t walk to your nearest computer and order it. It is an excellent story in an excellent and beautifully 'covered' zine. Well, worth the money. [6]