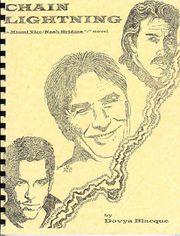 Chain Lightning is a slash crossover 163-page novel by Dovya Blacque, featuring Nash/Cortez, Crockett/Castillo, and a subtle poly Crockett (Nash)/Castillo/Cortez relationship, which is highly unusual for zine fic of the time. Art by Alayne & Anne Sattler.

Summary from the publisher, "Captain Nash Bridges is not exactly who he seems to be but only a few people know who he is… Who is Nash Bridges? And what does Martin Castillo mean to him exactly? And what in the world is Nash going to do about this growing tension between Evan Cortez and himself? And why is someone out to kill him?"

Summary from the distributor, Agent With Style: "Nash Bridges died eight years ago in an undercover-drug-deal-gone-bad, but before anyone outside of Nash's partner and family could find out, Nash was replaced by his cousin, a look-alike cop named Sonny Crockett, who had to 'die' to get get away from some Miami dealers who wanted to put his head on a pike. The solution? Switch the bodies. For eight years, 'Sonny' has been dead and 'Nash' has been annoying the criminals in San Francisco. It's been so long that even his partner and daughter have begun to forget that Nash isn't the original Bridges. Until, that is, Sonny's former boss, Martin Castillo, shows up. Then all hell breaks loose."