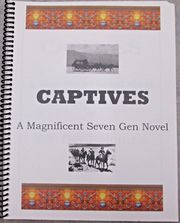 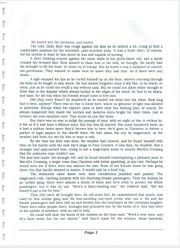 From the Online Version

This is the rough draft of a story which was published in 2000 by Kathy Agel's Criterion Press.

This story was the Winner of the 2001 Ezzie for Best Old West Fanfiction, for which I am profoundly flattered and grateful!

It was written as a birthday fic for Dina, who requested an Ezra h/c story. This is a rampant Ezra h/c and angst fic, with some Buck and JD angst thrown into the mix for good measure! [1]

This tale is hurt/comfort at its very best, providing as it does not only a high degree of both, but so much more beyond. It brings the Old West to life with its gritty action, with its vivid descriptions of the landscape and the people who live there, and with its telling of a rowdy search for frontier-style justice. It opens with the knowledge that one of the Seven, Ezra Standish, has been missing for two months. Though his friends are deeply concerned and desperately trying to find him, opinion runs rampant through the town that the gambler has deserted his fellow lawmen. When Nathan and JD find a young girl wandering in the desert, the rest of Four Corners's regulators are lead to a horrific discovery, one that reunites them with their friend and catapults them into high adventure. There's angst aplenty here as Ezra fights to recover from his ordeal, as Buck deals with the guilt of a past mistake, and as JD struggles to realize what kind of man he is. This is a fully realized story with pacing that heightens the suspense, with exciting action and a heart-rending search for justice, and with characterizations so rich that it isn't a story that can be read by only The Magnificent Seven fans. That fandom's readers will easily recognize their favorite characters. They are all here, in all their shades of gray, and none are short shrifted in the plot. They are backed by well-developed original characters, as well, one so villainous he makes your spine crawl. And the author provides them all with a story that balances plot with emotional development so well that anyone who just plain likes a good read should give this one a try. [2]