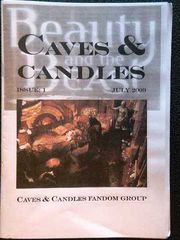 Candle and Caves is a print and online newsletter for the fans of Beauty and the Beast. In its third issue, published in December 2009 the publisher described its contents on their Facebook page: "In our 3rd issue of our Caves and Candles newsletter, we wrote about the history of a community of society`s outcasts who inhabited the Central Park area of NY long before the tunnel world existed. We also take a look at the beautiful artwork of Clare Sieffert and for the adventurous traveller, an article on an amazing underground hotel in the Australian outback which would be a fantastic location to hold a beauty and the beast convention! Our membership currently stands at 30 plus 11 honorary members, which is a great success and has shown that there is still alot of interest in the Beauty and the Beast tv series."

By August 2010, the publisher reported they had 60 subscribers.

It is unclear whether the December 2010 was published and in 2011, one of the editors stepped down from the project.