The fans who proposed "Bullet" were in a bit of a battle for what they felt to be the hearts and minds of Starsky & Hutch fandom.

In the end, bitter arguments, demands (implied and otherwise) for fealty, hurtful words on both sides, and rumored threatening personal letters sunk "Bullet," and it never occurred. 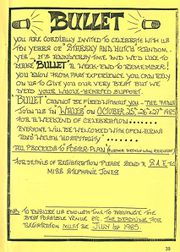 The long-running and popular DobeyCons were attended by fans who had a variety of views regarding David Starsky and Kenneth Hutchinson, and as a result, while the con was not billed as a slash con, it was mostly welcoming to those fans who supported a sexual or physically intimate relationship the two characters.

However, a schism among fans regarding slash had intensified during 1984-85. DobeyCon was caught in the flack regarding views on fans' slash, as well as differing views about what it meant to be a "good" fan and how that related to being a fan of a specific celebrity (in this case David Soul) as opposed to being a fan of the characters.

The tensions among these fans can be seen in the comments in Shootout and APB.

In a bit of a power-play, some out-spoken and staunch gen-only fans organized a fan gathering for Soul fans called Soul Mates Weekend. This was something that drew a line in the sand, causing fans to demonstrate their fealty (and their time and money) to "their side." As a result, the sixth DobeyCon (which tolerated slash) suffered a lack of support. DobeyCon was canceled at the last minute due to lack of support, something that frustrated and angered many fans who'd heartily enjoyed the con in the past.

This anger caused two fan on the "slash" team to plan "Bullet."

There are MANY fan comments about this in APB.

In Between Friends #9, there was some discussion of "Bullet":

We intend to organise an anniversary celebration of 10 years of S&H — the characters, the show and fandom itself. We have lots of exciting plans for this event, and those who attended D3 (DobeyCon 3) will know from experience my partner and I won't let you down. However, to make this work we need your full support! Join us in October and together we'll put British fandom back where it belongs. Our American 'cousins' are celebrating with style and we wish them every success with the venture (we also wish we could join them). Let's emulate their loyalty to S&H fandom and support our own celebratory convention. We look forward to hearing from you.