From Fanlore
(Redirected from Brother Will)
Jump to: navigation, search

Albion Special is a Robin of Sherwood gen series of four physical zines, three with two novels in one, the last one a single novel.

Albion Special 1 was published in 1989, contains two zines in one, and is 143 pages long. These are both novels and you must flip over the fanzine to the other side to read the other story. The art is by Paulie.

Thank you so much for the lovely book. The stories are great and a real logical extension to the series. I hope I get Albion 3 and that the sky doesn't fall!...[1]

Hello. I'm glad to be your first mail-order buyer of Albion Special. In fact, I just got it yesterday and guess what? My schoolwork went right down the drain. It's a good thing nothing was due immediately! I spent last night reading (devouring) the zine and I can tell you immediately that both stories were great! Jeanine Hennig writes such good Robin of Loxley stories. She must know a great deal about the Old Religion, because she incorporates it so well into her stories. The idea of separating members of the band is a good one. Also, I'm glad that somebody finally explained what "Iman" meant. One thing I want to know - and I'm guilty of it, too - is why do writers want to hurt their characters?! I mean, she sent poor Robin and Nasir into galley slavery! That's very cruel. I really liked the magical scenes, though, or the "extended senses" scenes, like where Robin hears speaking although he cannot possibly have done so with normal senses, or where Robin is prepared for the band's homecoming and John asks how he knew. She handles it well, even the touches of humor, which I think are the most difficult. I also enjoyed the fact that Marion KNEW Robin was in danger. Bride to Herne's Son, Maiden in her own right, soul-mate, of course she'd know! Nice touch! I think the most interesting point is that Robin cursed the ship, using his power to cause the downfall of the slavers - not that they didn't richly deserve it, but it showed an aspect of Robin's personality that we only saw in the beginning of "The Witch of Elsdon"; his ruthlessness. Robin of Loxley can be one frightening individual in the right circumstances!

As for "Brother Will", it was an excellent idea. An entirely new character, with a background of his own, is always a good addition. I really like Brother Will! I winced at the poor man's innocence and naivete, though. Actually, considering the time period, his attitude is quite understandable, but to suspect Robert of devil-worship is patently absurd! I enjoyed the theological discussion about the Christian God vs. Herne, because it was something I'd been wondering about myself, and Will's mystical experience was truly revelatory. The one thing that troubles me - probably because she didn't handle it the way I would have - is Will's abrupt recall of those horrifying events. I can't say I blame him for suppressing the memory, but I'm not sure that the amnesia was shown accurately. I thought he remembered and that that was what was torturing him. Then, when he did recall the events, I remember feeling as if Robert should have had a more active part. Will should have told Robert. Robert, too, should have realized, or at least begun to suspect, what was troubling his friend. But I still think it should've been Robert who learned the story. I'm thinking here about his powers/abilities as Herne's Son, abilities Robert doesn't seem to use. Overall, though, the tale was well-told. Your portrayal of Edward of Wickham was especially clear and vivid. The sense of the joyfulness of the Old Religion, compared to some of the strictures of the New is well done indeed.[2]

Albion Special 2 was published in Fall 1990, is 160 pages long and contains two novels.

"Night of the Raven" This is a really nifty idea for a crossed universe story. The characters are all superbly written. I loved "Nicholas Rennald" and his family. It's appropriate that the sheriff and Gisburne are stuck with each other for all eternity. The build-up of how Indy and Marian end up in the 13th century is extremely well done. The initial reactions of the outlaws to their two unexpected guests is excellent, also.

From there, a few points puzzle me. I felt like I was missing something when Indy hid out in the priory. Obviously, Indy was the mysterious "Sir Henry," and it was funny watching Indy's reaction to de Rainault and Gisbume, but it seemed as though more focus should have been on Marian's time with Herne.

The end was quite good, I loved the metaphor with the animals. I was exfjecting Belleme to put up more of a fight, but I imagine that would have led to complications and another forty pages!! As it is, the story was thoroughly enjoyable. Good work!

"Enchantment" This story was also a lot of fun to read. The plot is beautifully developed, from Olwen's motives for kidnaping Robert in the beginning, to the band's discovering where he was being held at the end. The band's emotions during the year of Robert's absence are written with a lot of feeling, as are the scenes were the Earl believes his son is dead.

I love the way the history of Clun is filled out, how the evil associated with the castle (and Owen and Grendel) is entirely the work of Gulnar. The character of Olwen is well-written. She is a muitifaceted villain/heroine, and despite her sorcery, extremeiy likable. Watching Oiwen's sorcery ultimately turn against her is great. Under the spell, Robert is so sweet and charming, how could she help but fall in love with him? Their romance has a wonderful, fairy-tale quality to it. I enjoyed how Gisburne was used as a messenger in the story (also providing a bit of comic reiief-he's as bungiing as ever, particulariy in his attempts to "woo" Olwen). The appearances by Marion were well-timed, and it's good to know she has truly found the peace she sought.

Night of the Raven was very well done I thought. I never would have considered that an Indiana Jones/ROS crossover story would work. I found the explanations very plausible. I like the fact that Marian decided that the arrow should stay were it was and not in some Museum.

I also liked Enchantment. When i first started reading it, I though it was another bewitched Robin story. I didn't expect Olwen to fall in love with him or that Robin actually fell in love with her. An interesting explanation of how the spellworked. It was a wonderful story!

Are there going to be any more Albion Specials? [4]

Albion Special 4 was published in 2001 and contains 81 pages. 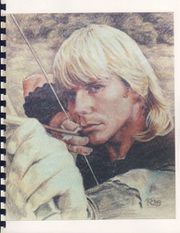