Bright Knight is a Forever Knight website owned by Amy R. It includes a personal archive of Amy's fan fiction, poetry, and essays related to Forever Knight; a collection of resources for the use of fans of the series; and a series of monthly fanfic recommendations, some of which are also archived on the site.

Amy R. links her website to her LiveJournal blog, "What's New on Bright Knight". [1] Here she repeats the monthly fan fic recommendations from Bright Knight. She also provides a monthly summation of new Forever Knight fan fiction that has been posted on FKFIC-L, FanFiction.net, and LiveJournal.

The index page of the Bright Knight website is visually dominated by a large white box containing the "Quotation of the Month" (taken from the Forever Knight television series). The logo is white, with a shadow effect making the letters appear raised. Otherwise, graphics on the index page are the same colour as the background, shaded to appear embossed. A column of links to the various subsections of the site appears on the left. 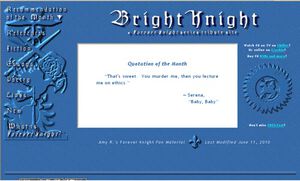 Screen capture of the index page of the Bright Knight website (July 2010).

The pages of the site are visually tied together by the use of common graphics throughout, notably a light blue, slightly textured background looking a bit like cardstock, which is used on the main index page and tables of contents pages for the subsections of the site. A matching solid light blue divider line and large embossed fleur-de-lys button appear on many pages. Text on these pages is coloured white, with turquoise links.

The various resource and fiction pages have a simple design of black text on white, with a larger font for the title, and links (top and bottom) in blue. Most pages throughout the site are decorated at the bottom with Amy R.'s initials in B&W block graphics.

The following resources on the Bright Knight site have been compiled by Amy R. for the use of other fans.

Since May 1999, Amy R. has made monthly recommendations of fan fiction. Stories are only listed by permission of their authors. In most cases, links are provided to locations off-site; however, some of the stories are archived on Bright Knight.

The following essays by Amy R. are on the Bright Knight website:[2]

The following poetry by Amy R. is on the Bright Knight website:[2]

The following stories by Amy R. are on the Bright Knight website:[2]