From Fanlore
(Redirected from Bloke's 7)
Jump to: navigation, search 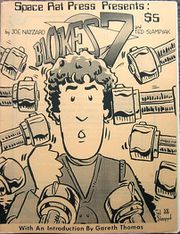 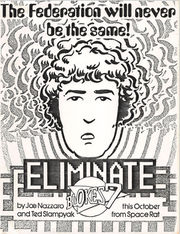 lefta flyer for perhaps another addition to this series; it is unknown of this was published. It is also possible that this is a flyer for the original "Blokes 7." 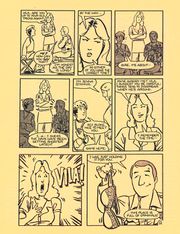 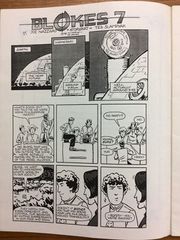 Blokes 7 is a Blake's 7 cartoon strip book. It contains a graphic story; text by Joe Nazzaro, art by Ted Slampyak.

It has an introduction by Gareth Thomas.

Art: covers and contents, all cartoons by Ted Slampyak

A two-page sample of this zine was printed in Freedom City Gazette #6 in 1989.

This issue is dedicated to Terry Nation: the man who taught us that a dream is worth fighting for, and a damn good friend to boot.

Introduction: The Road to Bloke

The idea for Bloke's 7 starting forming back in 1986, when I was putting together the first issue of The Freedom City Gazette. I wanted something really eye-catching for the cover, and the first artist that came to mind was Ted Slampyak. Ted had done a series of hilarious Doctor Who cartoons called "Who's On..." and I asked him if he could do something with Blake's 7. I gave him the germ of an idea I had for a cartoon featuring Vila as the leader of the rebels rather than Blake, and Ted said he was see what he could do with it. A week or two later, I received an envelope from Ted, with a cartoon almost exactly as I had pictured it. The seed, from which Bloke's 7 would eventually grow, was planted in the cobwebbed recesses of my mind.

Skip ahead several months to November of 1987. I had a cartoon that I thought would be mildly amusing. Again, the first person I thought of was Ted.

I soon found out that my comic strip idea had one major snag; Ted didn't want to do it. Fortunately, he had never reckoned with Joe Wh0-Doesn't-Take-No-For-An-Anser Nazaaro! Over the coming months, I tried every means of persuasion I could think of to win him over. Finally, I got a letter from Ted: "Okay, let's do it." Smart man.

The characters were easy. Bloke was the wide-eyed innocent; not stupid, but incredibly naïve. Vila didn't have to be parodied very much, thanks to Terry Nation, he was funny enough. All we had to do was give him something funny to say. Jenna was a touch one. She was a little harder to work with at first, until I realized that she was the perfect straight man for the script. After that, it was easy.

A few weeks later, I mailed off the finished script to Ted, and he finished the art in record time. When I finally saw the finished pages, Ted had taken everything I had written and added a few bizarre touches of his own (including the smile faces, the Federation Express card, and the Groucho Marx character, which had me in tears the first time I saw it.) Bloke's 7 was now a reality.

So what do you think, folks? Ted and I would very much like to hear your opinions, so please take a minute or two and drop us a line. We'd also like to know if you're interested in seeing more of Bloke's 7. There are so many jokes still to tell, and maybe I can trick Ted into doing another one. I promise you one thing The Federation will never be the same!

This is a cartoon version of 'The Way Back', prof. printed as an A4 booklet ($5) with 18 pages... I particularly enjoyed this 'saga' as it actually told the story very well, and some of the humour just crept up you, rather than trying to be funny all the time, which can get irritating. I hope they do further 'episodes.' [1]

Bloke's 7 is a comic book and well worth reading. It is the first episode, retold with a very tongue in cheek slant.

If you ever see a copy second-hand, grab it. I'm certainly not parting with my copy. <grin> [2]