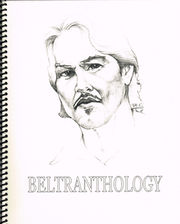 Beltranthology is a 90-page fanzine anthology with fiction focusing on characters played by Robert Beltran in Star Trek: Voyager, El Diablo, Shadow Hunter, Kiss Me A Killer, and Rio Shannon.

It contains one interior illo by Diane Running Horse as well as several cartoons from mainstream newspapers and magazines. The zine also has a page which recommends ten websites where fans can find more Beltran fiction and info.

Greetings fellow fan fiction readers and welcome to the first, and possibly the only fanzine to be dedicated to the film and television work of Robert Beltran. Best known for his portrayal of Commander Chakotay on Star Trek Voyager, this talented actor has appeared in numerous other projects, some of which are explored within these pages.

This zine started life as a brief 'wouldn't that be fun' idea, that rapidly got out of hand. From a desire to know more about 'El Diablo' came the search for writers, those intrepid souls who needed to know more about the various characters played by our favourite actor, and who were willing to share those ideas with Robert's fans. Within these pages, you will find a variety of writing styles and ideas, from first time writers through to seasoned web page holders. All joined by their enthusiasm for the tales lurking behind the film or television persona.

Our stories range from the delightful anti-hero El Diablo, through to the Indian cop Frank Totsoni from 'Shadow Hunter.' Taking a look in on other intriguing players such as Tony from 'Kiss me a Killer,' and Tito from 'Rio Shannon.'

If you are already familiar with Robert Beltran's work, then this zine should hopefully answer some of those nagging questions that hover after seeing a film or television appearance. However, if you have yet to see this talented actor in anything outside of Star Trek, maybe this collection will give you the impetus to rush out to the video store!

I have graded BELTRANTHOLOGY as being suitable for all ages, although there is some allusion to intimacy there is nothing blatant in any of the stories - or as my Granny would put it, 'nothing to frighten the horses!'