Bad to the Bone

Bad to the Bone was a fansite and fanworks archive dedicated to the X-Men character Marrow, hosted on GeoCities. It contained 13 fanfiction stories by 9 contributing authors and 75 pieces of fan art by 39 contributing artists. The site was active in the late 1990s and throughout the 2000s, the last update was in January 2008. The site goes defunct with the closure of GeoCities in 2009.

It was a member of the One-Shot Webring, X-Web (webring) and the Heroines Unleashed Webrings 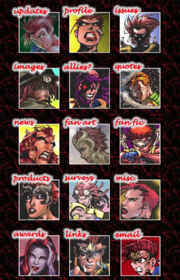