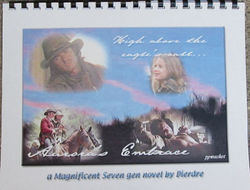 Aurora's Embrace is a Magnificent Seven gen 167-page novel by Deirdre, set in the Old West and with lots of hurt/comfort.

It was net published before becoming a print zine.

When diphtheria arrives in Four Corners it looks as if Vin is the carrier, but that's just the start of the tracker's heartache. Ezra is sick, the child he's taken a shine to is dying, and so is Chris. Their only hope is medicine, trapped on the far side of a washed out pass. So Vin breaks quarantine to get the life-saving Quinine for the people he loves, putting the Army on his tail with orders to shoot to kill. Avoiding the soldiers puts Vin on a collision course with an enemy who wants him dead, but slowly, painfully. [1]

His eyes bleary, he could still take in the Mare's Leg, the layered shirts, and... and the haunted eyes.

Haunted and desperate. And rimmed with guilt and sorrow.

He tried to speak but his lips wouldn't open. Then the soft drawl drew all his attention.

"Chris?" Vin sat down on the stool next to the bed, grateful for the clarity he saw in Larabee's glazed eyes. "Sorry about slappin' y', but y' was dyin' and I figgured y' wouldn't mind." He saw one corner of the man's mouth rise and Chris nodded. He pushed another spoonful of medicine in and watched the man blink lazily. He waited for the dazed eyes to refocus. "Listen up, pard, I ain't got much time. I'm headin' north t' get some medicine. Nate calls it Quinine. The Army's holdin' it just past Badger Pass." He rested his hand on Chris's arm for a moment, swallowing hard. "I wa- wa-" He swallowed again and composed himself. "I want yer word, Larabee. Don't y' die on me, y' stubborn bastard."

Vin smiled then, one fighting to be born for over a week. He saw the weak arm lifting and snagged it, locking the forearm in a tight grip. Nothing was said; it wasn't needed. Chris's eyes spoke to him clearer than any voice he had ever heard. He nodded, sending back his faith twicefold. "I'm holdin' y' t' it. Four days. Y' hang on that long... I got a favor, too." He bowed his head and reached inside his jacket, pulling out an envelope and a worn, brown-leather bag.

He saw Chris's brow knit, the dazed eyes following his hand. He propped the envelope against the mug on his bedstand where Chris could see it. "Just some words I tossed down. When yer up t' it... it's fer all y' done... it ain't much but, it's from m' heart."

Vin licked his lips and his hands trembled as he opened the small bag. "Listen, Chris, I want y' t' know... how sorry-" His voice broke and he bit his lip, swallowing down the wall of emotion. "They say I'm some kind 'a carrier, spreadin' disease t' folks and never gettin' sick. First my ma-" His voice broke a little, causing his words to shatter. "Then Callie... God, she's just a baby... She didn't deserve t' die."

Die? Chris's weak fingers tried to reach Vin's shirt, to get his attention. It was only inches, but it might as well have been miles. He saw such a mask of pain and unbridled anguish on Tanner's face it lanced through him like a saber. The tracker's chin trembled, his voice was broken, but the eyes they were haunted, lost in a place even Chris couldn't reach. His ma? Callie?... Vin... His lips wouldn't open. His hand wobbled and fell back against the sheet. He was trapped inside his broken body, watching the bits and pieces of Vin Tanner's soul shatter. [2]