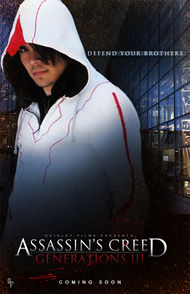 The first in the series has over 1.4 million views, and the second and third both have over 1.5 million.

Assassin's Creed: Generations was published to YouTube on October 31, 2009 as a submission for the "Live by the Creed" Assassin's Creed 2 Film Contest. Fan response was so widespread that Ubisoft published an interview with the creator, Tom Quigley.[1]

This one is far longer than the previous two parts and the darkest of the three. The martial arts choreography is better, and the dialog comes off well. The first few lines feel a bit forced, but by the end, the characters feel natural.[3]