As Smooth as a Waltz 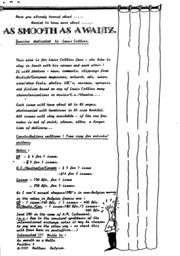 As Smooth as a Waltz is a Professionals gen anthology of fiction, non-fiction, clippings, ads, photos, and LoCs. It was published by Anne Marie Caluwaert in Belgium.

While the content was strictly gen, brief mention of slash fiction was included in issue #2, as well as at least one ad for a slash zine.

There are at least four issues.

A 1990 ad says: "Genzine dedicated to Lewis Collins. This zine is for Lewis Collins fans -- who like to stay in touch with his career and each other! It will feature -- news, comments, clippings from British/Euopean magazines, artwork, ads, swops, zine/shop lists, photos, LOC's, reviews, synopsis, and fiction based on any of Lewis Collins [sic] many characterizations in movies/t.v./theatre... Each issue will have about 60 to 80 pages, photocopied with hardcover in A5 size booklet. All issues will stay available -- if the one you order is out of print, please, allow a longer time of delivery. Contributions welcome! Free copy for artists/writers."

Guidelines in issue #2 stated that no anonymous content would be printed and that all poems must have titles. Further guidelines: "Do not exceed the bounds of good taste when writing about any characters Lewis Collins played on t.v./movies. While some of the universes deals with denth, war and violence these aspects should be handled with common sense and good taste. I encourage you to be creative and clever, imaginative and original - use all the characters as created on t.v./movie as the basis for your writing, expand and enrich upon what we were given; sequals [sic] on already printed fiction of other authors will be accepted after this author has given his permission.

Please refrain from any 'slash' or 'adult' fiction. As Smooth as a Waltz would like to stay an 'genzine' for all ages and all fans. Editing and rewrites will be done only after prior consultation with the author. The editor reserve the right to final editing and to refuse any storys [sic] wich [sic] may be demaging [sic] to the zine or Lewis Collins. Fiction that Is lengthy may be segmented over several issues at the descretion [sic] of the editor, alter consultation with the author. All storys [sic] must be neatly typed on one side of the paper, neatly handwritten or printed storys [sic] may be accepted but I stress the writing should be clear. If you send your original manuscript I will return it on request, no photocopied manuscript will be returned. I won't pass any non-used fiction to another zine without consulting the author. If any author has payed [sic] for three zines she/he will receive the fouth [sic] issue free."

In a 2007 posting to a fanzine mailing list, "As Smooth as a Waltz " was described as a letterzine and 3 issues were offered for sale.

In a 2010 Livejournal community posting, it was described as being made up of black and white "photocopied articles about Lew and some gen fanfiction about Bodie and Doyle". The zine was published in Belgium in the 1990s. [1]

As Smooth as a Waltz 1 was published in very late 1989 or very early 1990 and contains 83 pages. The artwork and fiction is by Anne Marie C. 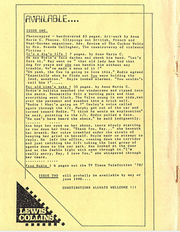 As Smooth as a Waltz 2 was to have been published June/July 1990 and contains 90 pages. The artwork is by Anne Marie Caluwaert. 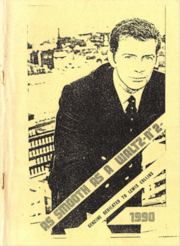