Antler Guy and Neighbor Steve is a Tumblr thread inspired by a photo, captioned "A house I pass on the way to work has this sculpture in its yard. Its about 8 feet tall." 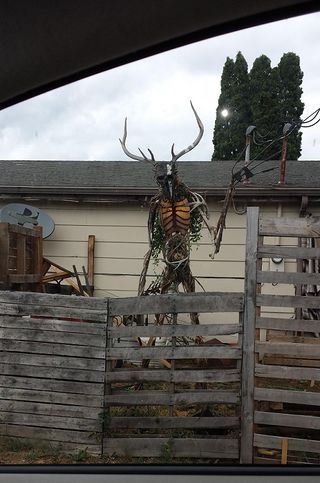 In the comments beneath the original photo, geostatonary started writing a story:

“HELLO NEIGHBOR STEVE, I WOULD LIKE TO INVITE YOU TO BARBEQUE ON THE EVE OF THE BLOOD MOON. I FEEL WE GOT OFF TO A BAD START.”

“NEIGHBOR STEVE, DO YOU NOT WISH TO PARTAKE OF THE UNCLEAN FLESH-MEATS OF PIGS AND THE POLLUTED ESSENCES OF TOMATO? PERHAPS YOU ARE A CAROLINA STYLE MAN, NEIGHBOR STEVE?”

I have the feeling that the families get along great except for Steve. Like, the wives are baking (questionable) brownies together, the kids are playing together, Antler Guy occasionally takes Son and Timmy to school (no car, just carries them in huge swinging strides through a nexus of ungoldly sights in a swirling netherworld shortcut. Sometimes they stop for McDonalds). Hell-wife gave them a potted Audrey Jr., Steve’s wife (who I now christen Sharon) gave them a begonia.

One time Steve tries throwing holy water but all Antler Guy does is thank him, saying that no, Antler Guy isn’t Catholic but it’s the thought that counts, he is so kind to water his creeping deathshade vines regardless.

The story continues in other comments - Antler Guy being a friendly neighbor, and Neighbor Steve continuing to try to drive him out of the area, until they wind up teaming up to take out someone who's truly creepy and predatory.

Later, they help out the victim:

When Antler Guy and Hellwife present her and her mother Beatrice with a tiny Audrey Jr. (”pOOr ThinG Is a ruNT And wOn’T geT MorE Than A FooT taLL, BEa, aNd NeeDS a New FRiEnD”, assures Hellwife), both mother and child burst out crying. Millie names it Bella, after Bella Lugosi, and shows it to the excited group of boys (Steve and Augy included).

Several examples of text style used to portray voice: Antler Guy's all-caps indicating a deep, booming voice at contrast with his suburban-neighbor dialogue; Hellwife's erratic capitals which are usually imagined as a voice with erratic pitch and volume, and the "eldritch" lettering used when Antler Guy goes after the villain.