The Angelcest Big Bang, or Angel Big Bang, was a big bang challenge in Supernatural fandom that focused on angel pairings, also known as Angelcest. Authors had to write a piece that was a minimum of 15,000 words, and artists had to create two digital pieces of large art (min: 500x500), or two sheet of traditional art, or an album/track cover art and a minimum of 12 songs.

Monstrosity Divine
Writer's Name: themorningstar
Artist's Name: h4ppy_fun_b4ll
Genres: Canonverse, Alternate Continuity Season 7
Rating: M
Warnings: Graphic Violence, Minor Character Death
Summary: After declaring himself God, Castiel realizes that Hell is a necessity and a strong leader is required to maintain the damned souls. Discovering Crowley's betrayal, he deposes him and decides to put one of his own kind on the throne of Hell, and who better to manage Hell than the first fallen angel? While initially mistrustful, Lucifer is content to allow Castiel's newfound powers to work to his advantage, but he soon notices that there is something distinctly off about Castiel. The souls from Purgatory are driving him mad, and something else is lurking beneath the surface, hiding within him and waiting for its chance to take control, pushing him ever closer to an inevitable end.

Art by stefy_coool, created for the story Clipped Wings 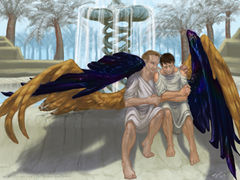 Art by 365wyrms created for the fic Wartime Wings Beloved

Wartime Wings Beloved Writer's Name: winnywriter
Artist's Name: 365wyrms
Genres: AU - Angels, pre-humans.
Rating: R
Warnings: Character death, violence.
Summary: Heaven is at war: the Leviathans - God's Great Beasts - are ravaging the earth, threatening the Kingdom, and the angels are the only ones keeping them at bay. In the midst of the fighting, a forbidden love has grown between two of God's soldiers: Balthazar and Castiel. For as long as the war rages, they cannot be together, but neither of them know whether they will both live to see peace.

God of Small Things
Writer's Name: Marie-de-Sade
Artist's Name: Fantalaimon
Genres: supernatural
Rating: R
Warnings:
Summary: Castiel/ Lucifer. Season 5 AU: Castiel comes back from the dead fully human. Michael keeps him locked away in the Green Room hoping that he might be of use against the Winchesters. When Lucifer makes the first move in the new war, attacking Michael and destroys the Green Room, he finds Castiel beneath the rubble. He takes Castiel back with him but finds Castiel's memory of him and the rebellion has beenskewed from the milleniums he's spent in heaven. While Lucifer hides Castiel from Michael, knowing his brother will lock him away forever if he has too, Castiel slowly comes to realize that most of what he's been told hasn't been entirely true.

Apple of Your Eye
Writer’s Name: omano27
Artist’s Name: Tarte
Genres: Angst, Hurt/Comfort, Tragedy
Rating: M
Warnings: Major Character Death, Description of Violence
Summary: With the angels falling, Michael and Lucifer are out of their prison as well. But as it soon turns out living together suffering from aftershocks of their abrupt get-out isn’t a piece of cake what with Lucifer’s thirst for revenge and Michael’s grace burning out through the crack that still somehow connects him to their time in the Cage. Michael is turning human; and Lucifer just won’t let this happen — for the sake of his own sanity or the sake of the world not slipping into what we know as The End.

Brotherhood
Writer’s Name: dridri93
Artist’s Name: michaellemieux
Genres: Hurt/Comfort, Angst
Rating: PG-13
Warnings: minor violence
Summary: Gabriel had always found true peace with Castiel, ever since he'd first taught the tyke how to use those gargantuan ebony wings of his. And Castiel had always acted as his voice of reason, of compassion, when Gabriel passed judgement in his Father's name. But after the Fall, everything became more complicated, and peace even harder to find. Heaven was changed fundamentally by their Father on that fateful day, and from then on every angel was a soldier. Even so, behind the lines, Gabriel discovered peace in Castiel's wings. But nothing so wonderful could last forever. 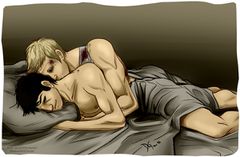 From God’s Lips to You
Author's name: fatalchild
Artist's name: MashuraDi
Rating: M
Summary: God is dying, and the world is going to end if he does. The only chance to save him requires the power of an archangel, but Michael is in the cage, and Lucifer, at first presumed dead, has lost his grace and his memories. Still convinced that Lucifer is their best chance against the Darkness, Castiel seeks him out and strives to protect him from a long list of enemies, even if that puts him at odds with his friends. What starts as battle strategy soon becomes more as Castiel is forced to contend with the difference between the stories told in Heaven and the Lucifer he’s come to know. The truth may hold the key to returning Lucifer’s grace, but Castiel doesn’t have a lot of time to find it.

Those Left Behind
Author’s name: Mariedesade
Artists name: Emmatheslayer
Story title:Those Left Behind
Story Ratings: M
Story warning: Suicide (pass reference), drug use.
Story summary: Lucifer wakes up on earth. Suddenly out of the cage and without his grace working, he wanders until he finds a demon still loyal to him. The demon points him to Castiel, the only person who might know what happened to the angels. Lucifer goes off in search of answers but instead finds his broken little brother, tossed out on the streets and constantly chasing after bottles and needles. Lucifer picks Castiel up and takes him home, his desire for answers disappears as he tries to bring Castiel back from the brink. But they can’t live like that forever. Lucifer wants Castiel but he can’t stand living on earth. He struggles with whether he should shatter their fragile lives together to try and build something better or live in misery but keep Castiel safe from the coming battles.

Author’s name: Posionedcup/lux-tuli
Artists name: omaano
Story title: Finding Home
Story Ratings: T
Story warning: none (art contains body horror, so careful with that)
Story summary: Before Chuck goes off with Amara, he reunites the archangels - bringing Michael out of the Cage and resurrecting Raphael and Gabriel. The group is left to deal with all their unresolved issues with each other, for better or worse.