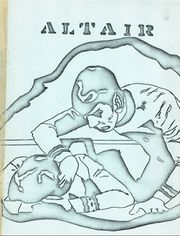 You may be looking for the character Altaïr Ibn-La'Ahad.

The art is by Pat Stall, Margaret Hammond and Patricia Webb.

Enough small talk, now down to business. We would first like to thank you for expressing an interest in Altair.  We hope that you will enjoy reading it. Sorry for the lightness of the printing on the first 20 pages or so, and for any typos. Also, some of you will notice two page fourty-four's. Either ignore the second duplicate, or stop reading after the first and continue a few hours later with the second to refresh your memory. Secondly, we wish to thank Bev Volker, Nancy Kippax, Pete Kaup, Pat Stall, and Jennifer Olsen for contributing, Mandi Schultz, Rusty Hancock, Bev Volker and Nancy Kippax (Bev and Nancy are editors of Contact, a Kirk/Spock-relationship zine, for all of the people who got flyers from Mandi, or Rusty or either of us and who didn't already know) for passing out flyer; and all of the people who placed orders and then waited so patiently. Thirdly, a clarification. Amazingly enough, Altair has not even hit the streets and we have already gotten comments on Pat Webb's story, "The Search." Pat wrote the story as sarcasm only, because of Captain Kirk's past record of being slightly neurotic. It was not written to deface, defame, default, deflate, degrade, demote, demolish, denounce, or destroy Captain Kirk or his character. (OK? You know who you are, don't look so innocent!) If anyone else has comments, let us know, they are welcome.

After all of that, I think we'll let you read on. Thanks again. Peace and Long Life, Margaret & Pat.

There is both good news and bad news about this zine. The bad is that most of the contents are of such low quality they bring new meaning to the term 'amateur. The good news is that most of it is so badly printed you can't read it anyway. However... there are a couple of pieces included that are decent if not outstanding, and one story that is nothing short of first-rate... 'To Each His Own' features yet another half-Vulcan, half-human Lt. Mary Sue. The plot sort of eluded me, since two the pages were totally illegible. 'City of Hat' is a 'Space Seed' story with a plot straight out of Brothers Grimm. It's not too bad, but nothing to write home about. 'Stronger than Love' is one page long, and flat out the best female Romulan Commander story I have ever read. First rate -- couldn't be better. 'The Catalyst Ingredient'... usually I'm not too fond of these authors' work, but this story is pretty good. It is mostly because they have a character aboard the Enterprise -- a full Vulcan named Samek, who makes Spock look like a prize dodo. The plotting is clever, the story reads well, and there's rather a nice denouncement... [The] 'Missing' author decided to remain totally anonymous, which was a wise move on his or her part. This story was so incredibly bad it's almost funny. It is a Yeoman Rand piece in the first-person. The author tells of the re-assigning of our favorite crew member to a new ship. Perhaps the most obvious flaw is that he/she/it does not seem to realize the past tense of 'scare' is not 'scarred' but 'scared.' ... Following all of this is a Mary Hartman parody, a series of letters concerning the 12 traditional days of Christmas, which should be funny but isn't, a one-pager called 'The Unknown' which is very clever, but can't be described without giving away the trick, and a story 'The Search' which has Kirk looking for a wife. For some reason this last one is supposed to be controversial though for the life of me I can't see why. To sum up on a scale of 1-10 this is about a 3. The artwork is at the most barely adequate. The best illo is the front cover which is either Spock nerve pinching someone (I'd guess Kirk maybe by the braid on his sleeve) or taking a pulse. This is a perfect zine to borrow, mostly for the Hammond story. [1]