Alt.tv.quantum-leap.creative was the Quantum Leap newsgroup with a focus on fanworks. 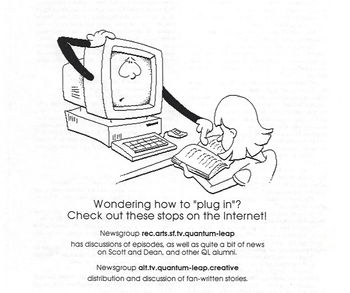 an October 1995 plug printed in the zine Leapin' Friskys #6

This group is alt.tv.quantum-leap.creative. It is intended as a replacement for the older group alt.ql.creative.

The *sole* purpose of this group is for stories and any other bits of creative stuff people may come up with in connection to the TV series "Quantum Leap." It is based primarily on the group alt.startrek.creative, which is for the same purpose (when dealing with "Star Trek-related works). No infringement upon Belisarius Productions, Universal, NBC or anyone else connected with "Quantum Leap" is intended.

All rights to posted material belong to the author.

Discussion of posted material, writing concepts, and of other topics related to fan-produced media (zines, etc.) is welcome. Many writers appreciate feedback; at the very least, if you read something of theirs and enjoyed it, drop them a note and let them know.

Background: I had first informally brought up the idea of a QL .creative group on November 19 or 20, 1992, in the groups rec.arts.tv, rec.arts.sf.tv, and alt.startrek.creative. Reasons given:

(1) QL is an apparent fertile ground for creative works, as evidenced by the number of fanzines published, and the various parodies, filks, and other bits of writing that have been showing up on rec.arts.(sf.)tv recently. (2) A separate group was proposed due to the fact that stories often take up a considerable amount of bandwidth. The group alt.startrek.creative has been known to cause considerable lag-time when accessed during prime hours, due to the size of its files. Also, creative pieces are much more particular to QL than normal r.a.tv discussions, and their posting on r.a.tv may not be appreciated by those who don't watch QL. (3) One specific group makes it much easier to locate works, and also easier to receive comments (if wished), as well as inspiration.

On December 1, 1992, after receiving a number of positive responses (and no negative ones), I posted again, asking for volunteers to help get the group started, since I did not know the proper formal procedures myself.

Credit for the actual creation of alt.ql.creative goes to Edward Chen (e...@EVOLUTION.BCHSUH.EDU), who created the group during the first week of December 1992. Unfortunately, discussion for the group was never given a chance to pass through alt.config; subsequently, a.q.c. suffered from severely low distribution and a poor naming scheme.

This current group, alt.tv.quantum-leap.creative, was created on January 27, 1995 as a replacement for the older group. A.t.q.c was discussed in alt.config beginning Jan. 10, 1995. It is hoped that the new group, possessing a better chance of increased distribution as well as a more suitable name, will gradually supplant the older group.

Posting: The group itself is unmoderated, so post what you may wish. There are no restrictions against more..."risque'" works except for the author's own judgment and sense of taste. In general, if you feel that the contents of your work may be potentially considered inappropriate or offensive to some people, please kindly use warnings before posting the piece. (If net.policies say any different, please let me know!)

Publishing: Those writers who are planning to later publish their posted works (or, conversely, planning to post something they want to publish later) may wish to consult their respective editors. Different zine editors have different policies regarding material that has previously appeared in an electronic forum.

Misc: Once again, alt.tv.quantum-leap.creative is for QL creative stuff ONLY, and NOT for discussion, unless the topic relates to the area of creative works. I urge anyone with a creative bent (a creative bent what?) to use the group for whatever may come to mind ...And for those of you who just prefer to read, do so, by all means! Perhaps you'll be inspired to come up with something, too.