Alpha Zone was a fansite in Alpha Flight fandom. It had character bios, comics news, and other fan related information. The site held a fan art contest, and was the hosting site for Alfa Fwight art, Alfa Fwight was a fan project to create a child like Alpha Flight team, similar to X-Babies. Its last update is unclear, but it appears to have been static for most of the 2000s, it remained up for viewing until the closure of GeoCities in 2009. Alpha Zone was also the homepage of the Alpha Flight Comic Ring. 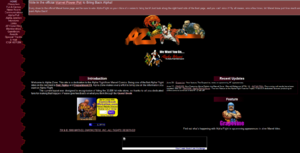