Alias Smith & Jones Trivia is an Alias Smith and Jones tribute site created by Thorne Moore. It is notable for containing a detailed "virtual tour" of the film set for the series, but also includes the author's Beatrix Potter-styled cartoons based on the show. In addition, there is a "Useful Contacts" page. This originally only included links for fansites and contact information for TPTB. However, now that there are books and DVDs available, the current version has been updated to reflect this.

Tour of the Film Set

According to Thorne's introduction to this section:

I watched Alias Smith and Jones in the 1970s and was innocently unaware that our heroes spent week after week riding up and down the same half dozen roads, getting on trains and and alighting at exactly the same station platform, staying in the same hotels, robbing the same banks.. Perhaps I thought that the USA must be littered with Wild West town just waiting for a film crew to arrive. I was very young.

Watching again decades later, with the benefit of a video recorder and, later, a DVD player, I started to notice the same buildings appearing again and again, and I became obsessed with piecing together a jigsaw that had no straight lines or right angles. I finished up hugely impressed by the cleverness of it all, especially when a tour of the set in 2000 proved my theories more or less correct.

Map of the Alias Smith and Jones film set in 1971, drawn by Thorne Moore.

The film set section is structured around two maps: a map of the set as it was in 1971 (when the show was filmed), as pieced together by Thorne; and a map of the "present day" set, as seen on the studio tours that were taken in 2000. With the former map, clicking on the buildings marked on the map takes you to thumbnail shots from the show.

In addition, there is a "photographic tour". This is divided into sections for each part of the lot. The sections use screen captures to illustrate the buildings as they appeared in the show, with comparison photos that were taken during tours of the lot in 2000.

This section of the website contains cartoons of a few scenes from Alias Smith and Jones episodes with the characters rendered in Beatrix Potter style, with the heroes as rabbits. Besides a handful of individual pictures, the episode "The McCreedy Bust" is retold as "The Tale of the McGregor Bust". 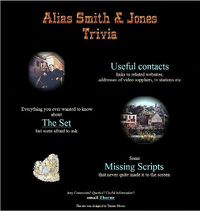 Screen capture of the index page of the original version of Alias Smith & Jones Trivia.

Alias Smith & Jones Trivia was originally located at http://www.ptmin.fsnet.co.uk/index.html.[1] Sometime before 1 January 2007, the site was relocated to uk.geocities.com/asjtrivia@btinternet.com.[2] In late 2009, when GeoCities was shut down by Yahoo!, Thorne moved the site to http://www.asjtrivia.co.uk/.

When the Alias Smith & Jones Trivia site was moved to its current location, a larger, redrawn version of the 1971 map was substituted for the one previously on the site, as well as a larger version of the tour map. The rest of the Film Set section was also revised and reorganized, and the introduction added.