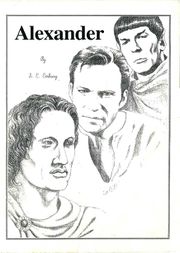 Summary from the zine's title page: "Kirk and Spock leave the Enterprise & crew behind to attend a time anomalies symposium, where a mysterious alien regales them with his unconventional ideas on the space time continuum. Kirk and Spock are sceptical of his theories, until they find themselves stranded two and a half thousand years in Earth's past, there to meet with Alexander the Great."

Summary from a 1993 publisher's ad: "Kirk and Spock find themselves trapped in ancient Babylon during the fabled Babylon during the fabled reign of Alexander the Great. Will Alexander prove to be the hero of legend or just another despot? The realities of life in this era are both brutal and exciting, and they find they must compomise their 23rd century moral values in order to survive."

Kirk and Spock meet a figure rather like the Traveller from TNG who sends the pair back to the time of Alexander the Great, one of Kirk's heroes. The Enterprise two have to live in Alexander's court until Chronos, the traveller, rescues them. The story juxtaposes the philosophies of Alexander and the Enterprise pair, highlighting the similarities and differences. The brutality of Alexander's time is counterbalanced by his personal philosophy ot racial tolerance which allows Spock total acceptance.

The story is a study of Alexander, the man and the hero, as seen through Kirk and Spock's eyes. The two are there as observers; the story concerns them but does not involve them in any danger or conflict; you never doubt that they will get home safe. It does not set out to be an action/adventure or hurt/comfort story; it sets out to explore the past with the eyes of the future, providing, at the end, a physical link between the two times - I won't explain how.

The story is well written with considerable attention to detail. Alexander the Great has fascinated me even since I read whichever one of Mary Renault's novels deals with his story; I read this zine in one sitting, finding myself drawn into the world which Sue has realistically created. [1]