Alcor Weyr was an approved Pern Role Playing club that used full-posting style. It ran as a Yahoo!Group with an associated website that provided information on the premise, characters, and setting of Alcor's particular version of Pern. The owner of Alcor Weyr is/was Josephine Barker.

The website was last edited in 2003, though it remained on GeoCities until 2009, when it was deleted by Yahoo!

On 8 Mar 2004, Josephine Barker posted a message to the Yahoo!Group WeyrPlug in which she announced that Alcor Weyr had reopened and was in need of new members.[2] The Alcor Weyr Yahoo!Group was extremely active in May–June 2005, but petered out slowly over the following two years.[3]

Alcor Weyr is located in the bowl of a dormant volcano on a peninsula on the Southern Continent. Building began during the 16th Pass; but before it was completed, a group of workers vanished. The weyr was abandoned, and became little more than legend until its rediscovery in the 17th Pass by a bronzerider looking for a lost ship. The rider asked permission to complete the building project, but vanished as soon as it was done. In the 18th Pass, his daughter, Nova, rider of gold Lilith, opened Alcor Weyr as her own.

The website contained three sets of pages, distinguishable by the graphics employed in their design. 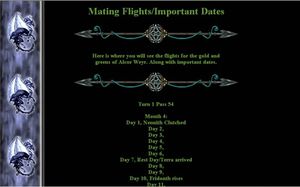 Screen capture of the "Mating Flights/Important Dates" page from the Alcor Weyr website.

The website did not include pictures of the riders or their dragons, nor were there maps or diagrams of the weyr and its surroundings.