Against the Wind (Man from UNCLE zine)

Against the Wind is an adult het and gen set of Man from UNCLE novels by Robyn Terskin (volume one) and CJ Morgan (co-author for volume two).

There is no slash in the first two issues and the third issue was never published.

On the cover of both zines: "Dancing the Edge of the Blade." The front covers are by Vanya. The back covers are blank.

The editor's page says future editions would contain slash and that there were three issues planned:

From the opening page: When it comes right down to it, I can disclaim responsibility for the tome. You see, all I did was ask a certain blonde fictional character a question. Boy, did I get answers. And then his best buddy added his two cents, courtesy another - CJ Morgan - who will be co-authoring with me starting with Vol. 2. By this time the pages were starting to rack up. I'd no intention of making this such a lengthy work. However, when it bites, feed it. As a certain defector ballerina (whom you will shortly meet) would say, "So". Against the Wind will comprise three volumes, the first (part the first) of which you are holding in your hands. Volume 1 part two will be out in the Fall along with, we're hoping, Volume 2. Volume 3 is due for May 1994. And in the meantime, there's that story back in '66 with Justin Sepheron. As you can see, there's a lot of story to tell. We hope you are as compelled to read it as we were to write it. -- Doskorava -- Robyn Terskin May 1993.

Against the Wind 1 was published in May 1993 and contains 326 pages. It is by Robyn Terskin.

From Media Monitor: "From the ending of Detente....to the reforging of a partnership. Fifteen years later...Against the Wind."

Against the Wind 2 was published in May 1994 and contains 188 pages. It is by Robyn Terskin and CJ Morgan. 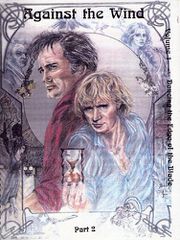 cover of issue #2, by Vanya

From "Media Monitor: "One by one, Russian defectors are being murdered. The UNCLE has been called in to investigate. Waverly has assigned his best agents to the case-including a certain Russian operative who had been retired from the field a year ago."