A Long Story is a slash crossover 132-page novel by Dovya Blacque. 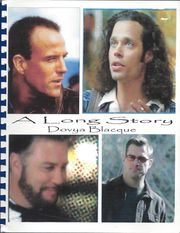 From the publisher: "When Blair Sandburg arrived in Las Vegas for an International Anthropology Society convention, the last thing he expected was to walk directly into a crime scene. But finding his cousin Robert missing was exactly the first thing Blair found. Arriving on the crime scene from the Las Vegas Crime Lab are Gil Grissom and Nick Stokes, the latter of whom clicks instantly with Blair. Through the difficult hours to come, Nick 'adopts' Blair, helping him through the steps needed to find his missing cousin. Later, once Blair has found shelter with a friend at the convention, another crime brings Blair back into contact with the Las Vegas Crime Lab. At which point, Blair's sentinel, Jim Ellison, decides he can't leave his guide alone to deal with everything so he joins Blair in Las Vegas to help solve not one but two crimes. This is a first time Jim/Blair, Grissom/Nick novel with a little Blair/Nick thrown in."