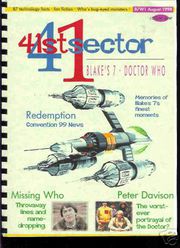 41st Sector is a Doctor Who and Blake's 7 gen anthology of articles and con reports.

General, though on the thin side (22 A4 pages not including cover) it has some good illustrations and interesting articles. Some of the illustrations are Gavin's own computer generated images and are worth a look. Also at only two pound it is good value for money.

In The Beginning - Gavin M Rymill (Gavin explains how he got into Blake's 7 (Star One was the first episode he saw and it includes a review of the episode). He also explains why having watched them all he considers the third and fourth season to be the best.)

Technology Fact & Fiction - Gavin M Rymill (Interesting piece on how far away we are from achieving the technology shown within Blake's 7. He believes that teleporting will never happen but says "by the time ships like the Liberator are flying through space, I guarantee you will be able to clip computers like Orac to your lapel.")

Dr Who: The Blunder Years - anonymous (but probably Gavin again) (A look at where Dr Who went wrong. He believes the problems started with Davison's Doctor but were the fault of John Nathan-Turner.)

Redemption 99 - anonymous (Steve Rogerson) (An article about what we are planning at Redemption next year.)

Untelevised Travels - Gavin M Rymill (Speculation over discontinuities between Troughton and Pertwee, focusing on possibility that the gap between the last televised Troughton and the first Pertwee may have been a lot longer and that Ton Baker and the second Romana period may have lasted for about 100 years.)

Hurray for the Bug-Eyed Monster - John Hulme (Do we want our Dr Who monsters to be subtle or in your face? Hulme argues for in your face.)

In Memory Alone - anonymous (but it reads like Gavin's stuff) A look at what the author considers were Blake's 7's finest moments - Orbit and Terminal. [1]