From Fanlore
(Redirected from Under The Counter Magazines Presents Alternative Treks)
Jump to: navigation, search

Under-the-counter magazine presents alternative Treks is a 1984 article by Wiley A. Hall III in "The Evening Sun," a Maryland newspaper.

first part of the article 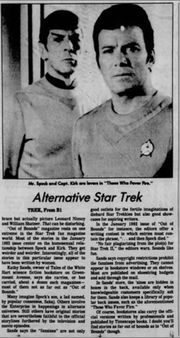 second part of the article

Excerpts from it were read aloud by Lezlie Shell at IDICon.

Think of Kirk's slightly rounded tummy, the way he purses his lips before he speaks, the hysterical tightrope he walked with each new crisis in each new episode.

Remember the way Spock's sharpened ears and pointed eyebrows seemed to echo the insignia on his chest; and his neat, schoolyard trick of arching one brown while the other remained stationary. Remember, too, the arch coldness, the prim rejoinder [sic] with which he responded to barbs from Dr. McCoy.

Now imagine Spock as a dangerous psychopath intent on ruling the Enterprise through his manipulation of Kirk. Kirk as Spock's slave -- his sex slave, creeping into Spock's bed, quivering at Spock's touch, driven to a point of sexual dependency rivaled only by his love for the Enterprise.

Doesn't exactly sound like the official, authorized version, does it?

I'll answer that for you. No, it doesn't... It is, in fact, so far from being the authorized version that Gene Roddenberry, Paramount Pictures, and Gulf and Western, owners of the Star Trek copyright, would prefer not to see such things old above counter -- has something to do with sullying the image.

Nevertheless, there is a burgeoning, thriving, under-the-counter market in unauthorized Star Trek stories. They are written by Star Trek fans, non-professionals who won't let the legend die but who aren't afraid to toy with the legend either.

Some of the stories are very, very good. Some are not so good.

The story of the psychopathic Spock is "Those Who Favor Fire" by Lezlie Shell and it appeared in January 1982 in a fan magazine named Out of Bounds, published in Houston. It is one of the good ones.

It is also, as you may have gathered, very, very offbeat.

If they rated short stories the way they rate movies, this one would get an "R." The homosexual scenes are explicit though they are not gratuitous -- meaning everything that happens between the two men furthers the purpose of the story.

The most shocking thing, in fact, is that Spock and Kirk remain so much in character that the reader can read about Kirk and Spock that when you read about Spock and Kirks locked in a passionate embrace but actually picture Leonard Nimoy and William Shatner. That can be disturbing.

"Out of Bounds" magazine rests on one extreme in the Star Trek fan magazine world. Most of the stories in the January 1982 issue center on the homosexual relationship between Spock and Kirk. They get weirder and weirder. Interestingly, all of the stories in this particular issue appear to be written by women.

Many [of the zines] imagine Spock's son, a lad named, by popular concerns, Sahaj. Others involve the Enterprise in happenings in alternate universes. Still others have original stories that are nevertheless faithful to the official storylines furthered by the television and movie episodes.