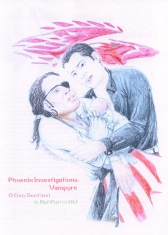 Phoenix Investigations: Vampyre is a 62-page gen crossover novel by Linda Knights. While there is some Rat Patrol, it is mostly Sentinel/Kindred cross. The zine includes an introduction to Kindred and is part of a trilogy.

From the publisher: "Phoenix Investigations thought it had seen bizarre before, but when Julina Luna asks them to investigate two random murders that might well be caused by Vampires gone bad, they face one of their most challenging cases."

Other zines in the series: