Once Upon a Furry Octopus

From Fanlore
(Redirected from Once Upon a Furry Octopus - skoosiepants)
Jump to: navigation, search

Once Upon a Furry Octopus is a Stargate Atlantis Rodney/John story by skoosiepants. 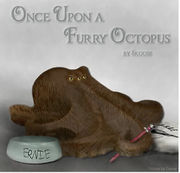 art for this story by Dacey

"Summary: He was an intelligent, intuitive pet, but he wasn’t going to start sniffing out ZPMs or hidden Ancient weaponry or detailed instructions on how to kill a Wraith with a common household item. A pen, for instance.

A/N: This is nearly incoherent cracky cheese-fluff with little to no plot at all, and I wash my hands of it. Seriously, I'm all over the place with this. Next, I'm going back to AUs. Back to the 80s, even."

Sometimes I'll read a fic and it simply makes me happy. Happy about fandom, happy about my show, happy that I can come across stories like this on-line. As the title says, this fic is about a furry octopus. In Atlantis. A furry octopus named Ernie, who is not particularly bright. It's also also a story about the effect of Ernie on everyone in Atlantis, and how they have to deal with Ernie in their day-to-day lives. It's all just incredibly charming and funny. Fabulous entertainment! [1]

The fun thing about aliens is -- they're alien. They don't always have the same motives as people do, and we don't necessarily have the facility to understand what those motives are. People in Atlantis understand this, and thus are willing to give the benefit of the doubt to whomever wanders in that doesn't try to kill them. And while they're not sure where Ernie comes from, or why he likes pens, they still think he's pretty cute. And so do I. [2]

If you’re a fan of first times, as well as fics that make you go “Awww,” then this is the fic for you. Ernie is a furry octopus type creature that is found on Atlantis, and works his way into everyone’s hearts as he steals their pens and communes with Ronon’s hair. And when it comes to John and Rodney, Ernie can see it just like the rest of Atlantis – with John and Rodney being the last to know. [3]