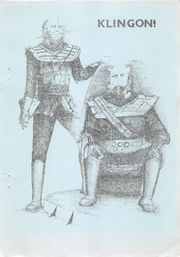 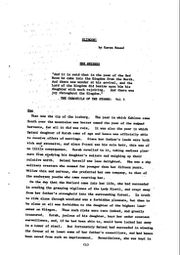 Klingon! is a gen Star Trek: TOS 90-page novel by Karen Maund. The cover art is by Ann Humphrey. It contains no interior art.

It was hard to answer because he would never admit to himself the reality of his attitude to Setani, But It had been something strange, a soft emotion that was strong. Another might have called it 'love'; Kahless' idiology had dispensed with the word. But to choose death over an attempt at revenge on one who had wronged you...? No, he did not understand. He pushed it to the back of his mind.

The sole survivor apart from himself was Andros. With his mocking ambivalence, the blind harpist was a natural survivor, he cared for nothing, he took no sides. He advised Kahless but, so Kahless thought, he had betrayed him to Setani, too. Andros was too self-centered to ever he a danger, too concerned to save himself. Kahless let him live while he was still useful. His gaze wandered back to the gleaming vessel, and he patted it admiringly. The Stones were Indeed powerful. They would bring him more than just this one world. Again he turned to his metal idol, his key to the future. He would leave and take his beliefs elsewhere. He would spread his ideology until he had built himself an empire that stretched to the end of the galaxy. And this vessel, this stone-powered spaceship was his key.

Kahless the Unforgettable was going to the stars.