After Karen passed in 2001, her artwork was used in connection with several charity fundraisers, mainly to benefit animal shelters. One example is MediaWest 2012 where the entire contents of Brit Wit 1-3 was offered as high quality scans on a flash drive.

Samples of the scans are below. 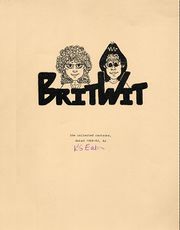 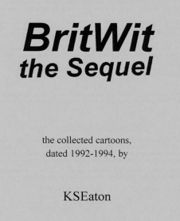 BritWit 3 is subtitled, "The Third: The Collected Cartoons" and has cartoons from 1994 to mid-1995. It was published in 1995, contains 65 single-sided printed cartoons - most are Pros, but some other fandoms. 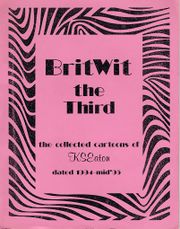 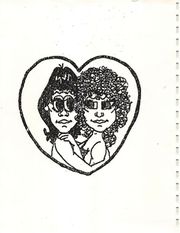 Well, here's BritWit the Third, the latest in the compilation zines of my cartoons. I hope you enjoy them!

Got a favor to ask. I've tried very hard to keep the price of the zine down as low as possible. My xerox costs increased slightly this year, which means I have to ask you to pay a little more. I'm really sorry about this, but the real world doesn't seem to understand the fannish mind-set. Go figure. Anyway, I'm asking again, please don't copy this zine. The price is fairly reasonable and is the lowest could go. Please don't xerox it for friends unless they're desperate for it and can't under any circumstances come up with the nine bucks it costs. Thanks. I also want to take this opportunity to say "Thank You!" to those of you voted to award me a special "Huggy Award" at Zebra Con 1993. I can't tell you how much it meant to me. It's framed and on my wall at home to remind me that I have some terrific friends out there.

I'll shut up now so you can enjoy your cartoon zine.