Hannibal/Will, or Hannigram is a popular slash pairing in the Hannibal (TV series) fandom. The relationship is between the manipulative cannibalistic serial killer Hannibal Lecter, and the mentally unstable FBI criminal profiler Will Graham.

In season 1 this pairing appeared to be doomed, as Bryan Fuller was adapting a complete work of novels and Hannigram wasn't the endgame. [1] Fans were quick to notice the show's creator was highlighting the tension between these two in the promotional material for the series. By season 2, many were already questioning if this was queer baiting or a valid use of homoerotic subtext.[2] 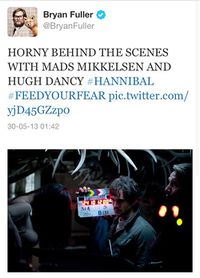 Bryan Fuller, the creator of the series, has often supported this pairing in interviews and tweets. Such as in an interview following up to season 2, he was asked:

FREDDIE (blogger): "Hannigram, Yes or no? We’ve heard it said that Will is going to have a relationship next season, is Hannigram too risque?"

BRYAN: "HanniGraham is not too risqué. In fact, I would argue that HanniGraham is already in play – just not physically. Hannibal is absolutely intrigued by Will Graham and has genuine feelings for him. And Will Graham, at this stage of their relationship, trusts Hannibal more than any other person. There is a genuine intimacy to how these two men have connected."[3]

Bryan Fuller had also given an interview to the AV Club[4] on rebooting season two, talking about how, “Will now, of clear mind, is beginning his own seduction of Hannibal Lecter. Hannibal has been working very hard to seduce Will, and now, it’s up to Will to seduce Hannibal.” [5] 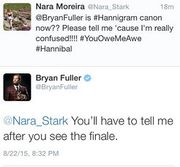 Season 3 was when shippers celebrated and discussed Hannigram becoming canon after every episode[6]. It started with episode 3x09 when the popular fandom shipping term "Murder Husbands" was used in the show, and culminated in the buzz after the series finale. Reactions varied: from drunken celebration, to quiet satisfaction, to "alright, not my ship, but I see what you mean", to uneasyness with the concept, to accusations of fanservice and queer baiting (because according to Bryan Fuller, he explicitly chose to not let them do more than embrace, even when he had the chance). The buzz was great enough that slash shippers of other fandoms, like Supernatural noticed, and congratulated Hannigram shippers on becoming canon.[7][8]

He (Hannibal) loves in a very strange way. - Bryan Fuller on Hannibal leaving the corpse-heart for Will.

Inspired by the appearance of Hugh Dancy and Mads Mikkelsen together in King Arthur (2004) before their appearance on Hannibal. Fandom could not miss the opportunity to ship the actors together in another universe, both correlated to Hannigram via the idea of reincarnation, and as their own stand alone pairing. This idea soon spread and combinations of Hugh/Mads ships from non-Hannibal works began popping up.[8]

In the film King Arthur (2004), almost ten years before Hannibal, Dancy's character says: "I don't kill for pleasure. Unlike some." Mads responds with: "Well, you should try it someday. You might get obsessed with it."[9]

Some other crossovers include: